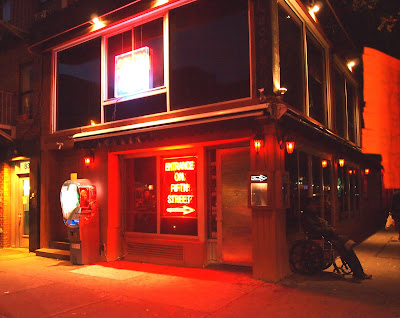 The owner of 85 Second Ave. — once home to Sin Sin — said the space will likely be home to a bakery, DNAinfo reports.

"It's not going to be a bar," assured Alex Shkolnik, who owns 85 Second Ave. "It's never going to be something like was there."

Shkolnik claimed this time around he would not work with Sin Sin's owners, who unsuccessfully tried to transfer their liquor license last year to a new group of operators.

Instead, he explained, Shkolnik's son will take over the space and open a restaurant featuring items like baked goods, coffee and juice.

"They're going to do probably a bakery there," he said, noting that it would serve "health food."

Why the president of the East Fifth Street Block Association carries a baseball bat
Posted by Grieve at 3:17 PM

Aww. It's gonna take a lot of 'health food' to exorcise the ghost of late nights past... especially those Thursday nights. Sigh!

It better be good. But what does his son know about coffee, juice, baking, health food, etc. If it sucks it will close, and a bar will open.