The Times champions sex and ping pong, sort of

Today, a newspaper called The New York Times has an article that has something to do with ping pong. The piece includes mentions of the new table in Tompkins Square Park. 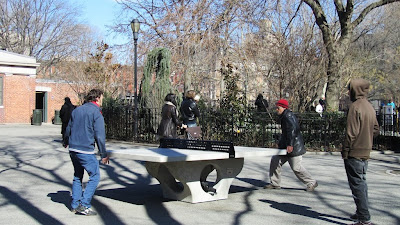 The article ends this way:

In 1971, a United States Ping-Pong team visited China. The ostensible purpose was to conduct some exhibition matches, but the effort has been credited with helping pave the way for President Richard M. Nixon’s historic trip the next year and has been described as “Ping-Pong diplomacy.”

Could the sport that paved the way for more open relations between two cold-war powers improve relations among New Yorkers, still shivering from a blustery winter?

Clearly, some are already counting on it. At the Duane Reade on Avenue B and East Second Street, one vertical display positioned in front of a wall of beer features Ping-Pong balls on one side, condoms on the other. Let the games begin.

[Photo by Bobby Williams]
Posted by Grieve at 10:58 AM

Just guessing the ping pong balls next to the beer might be slightly more beer pong related in nature, ya think?