Mara's Homemade blames their closing, in part, on the East Village bike lanes

Word is getting out this afternoon (via Twitter and Eater, for starters) that Mara's Homemade, the Cajun eatery on East Sixth Street, is closing at the end of April.

Via a letter linked to on Twitter, they mention multiple factors for the closing. 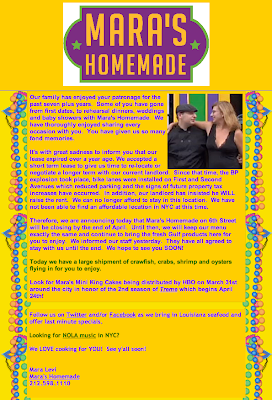 But the reason for closing that might generate the most discussion?

We accepted a short term lease to give us time to re-locate or negotiate a longer term with our current landlord. Since that time, the BP explosion took place, bike lanes were installed on First and Second Avenues which reduced parking and the signs of future property tax increases have occurred.

Sure, people were driving from all over the tri-state area to go to Mara's...

Bike lanes are a lame excuse. The landlord raising the rent is the obvious culprit...

Maybe doing something about the reviews describing them as overpriced and warning patrons to "watch for the upsell" might have been more of a factor.

Ate there 3 times. Love cajun food. Wanted to love the place. The food was good but the service was god awful all 3 times.

Ate here 2x. Food was good. No compelling reason to walk back there for dinner, though, let alone DRIVE!

BP Explosion and bike lanes. Ok. Could also be my only dining experience there, where I didn't eat much of my cole slaw and she full-on flipped out at me saying she hates people who waste food. It was actually just terrible fucking cole slaw. But yeah, probably those damn bike lanes.

Blame the ridiculously overpriced food, not the months-old bike lans.

There was a cajun restaurant on 6th??? I love cajun. Never heard of it. Maybe their marketing was the problem.

Bike lanes lol, yes every single car that was ever parked on that street were just there for some cajun! People on bikes don't eat or ever stop riding to go anywhere and people are used to bone crushing cars speeding by, scary bikes tho! Oh my! People on foot are even worse! Yes that will keep me from ever going to my fave restaurant in NYC. If I can't drive what's left? Bus cab bike or feet? See? The ONLY way to get anywhere is by car!

Ding Ding Ding to all of the above comments.

Lived in and loved New Orleans for four years. Walked by the place the day I moved to the neighborhood. Mentioned it to some friends in the city from NOLA - who know good eatin' - and the reviews were unanimous:

A shame, really. Could have been so nice.

Bought a King Cake once.

When The Redhead opened up the street, resolved that there was not a need for Mara's in the repertoire.

Plus, The Redhead, Good Beer, and even the market on 7th and A sell Abita Beer, so...

I don't worry about parking because I have the chauffeur drive me when I go out to dine.

Who can afford to eat out these days?

I'm surprised any restaurants have survived the past 2 years, let alone with the comments like those above......

Who can afford to eat out these days?

People can afford to pay 6 dollars for a beer, I'm pretty certain if they want to they could afford to eat out as well.

Great Place, Hope they find a new location. The location was always a big problem for me. That building always smells like the basement drain is backed up. There used to be a great Argentinian Steak house next door, but they had the same problem. If the landlord can't fix that problem, there are plenty of places for rent in the Alphabet

...The food was good but the service was god awful....

That was my experience. I'd add that they seemed woefully ill managed--the workers/waiters were okay but the owners didn't have a clue.

...the signs of future property tax increases have occurred...

That's an even lamer excuse than the bike lanes.

Can I blame my chronic under-employment on the bike lanes too please?

Okay if they're going to blame bike lines, which are such a great benefit to the city and the environment, then I say good riddance.

I'll support business that wants to support everyone.

I ate there a few times, had a good meal once, the crawfish boil was pretty tasty. The other times were pretty bad though. And not just that but the place is just weird, the lady's drunken boyfriend that decided to hang out with my date and I through the entire meal? Friendly is great but this went well beyond.

I'm shocked she's managed to keep it open this long. And now that she's blaming the bike lane I find it hard to have much sympathy for her.

Oh, and Mara is from Texas by the way, not Louisiana.

'...bike lines, which are such a great benefit to the city and the environment...'

This is one of those comments that is so absurd and self-delusional that raucous laughter is probably the only response.