Here at 12 St. Mark's Place, a restaurant space that has seemingly been about 10 different things in the last 10 years... Hirai Mong opened last March in the former Gama space. 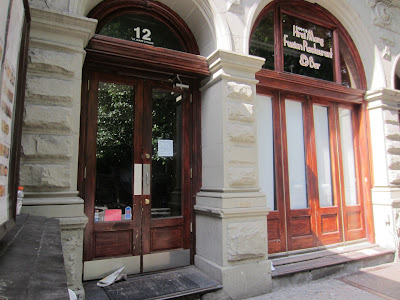 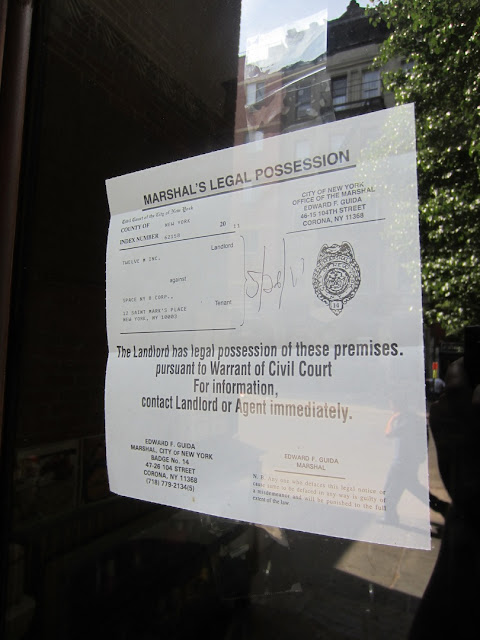 Previously on EV Grieve:
Former Gama space becoming a fusion restaurant and bar
Posted by Grieve at 10:36 AM

Hirai Mong? Gama? Whatever happened to names like Ed's Bar and Grill?

@Lisa: Thankfully there is still Joe's Bar in the East Village! Great jukebox too!

Yeah! These names are confusing, foreign sounding, and scary!

To call it fusion is misleading. It's simply korean-style Chinese, nothing newfangled about it. Of course you people couldn't tell a ja-jiang myun from yaki mandoo if your lives depended on it.

Lisa, Marty, and Kurt, your comments are narrow-minded and ignorant. This is an Asian restaurant with an Asian name like thousands of other NYC restaurants with names that are not in English and do not sound like Ed's Bar and Grill. The cultural diversity of our restaurants and communities is a major part of what people love and respect about NYC.

Do you find yourselves calling Au Bon Pain and Chipotle "confusing, foreign sounding, and scary"? I'm sure the answer is no. I would think about why that is.

"It's simply korean-style Chinese, nothing newfangled about it. Of course you people...."

@Mary: What's narrow-minded and ignorant about my comment? There is a Joe's Bar in the East Village and the jukebox has Johnny Cash, Frank Sinatra and Joan Jett on it. And for the record, Au Bon Pain and Chipotle scare the shit out of me, but for reasons maybe you don't understand.

P.S. I'll let Lisa and Kurt speak for themselves, but I think their comments went over your head.

Marty - Back off. Mary is trying to make a sincere point and you decide to respond like a prick. In the context of previous comments your comment can easily be construed as inflammatory. Sarcasm doesn't always translate well online. Neither does intelligence, apparently.

@Mary – yup, if you didn’t know my comment wasn’t completely tongue in cheek you could easily call it “narrow-minded and ignorant”. My comment was in direct response to Lisa’s response. I don’t know her from Adam but at best her post was xenophobic. This post and her previous regarding the developer of 35 Cooper Square, Arun Bhatia, where she asks,” Isn't there some ancient temple this shithead could be ripping down in Lahore?” shows me what kind of person she really is. Especially give that Bhatia is from India and not Pakistan.

It’s too bad that someone who lives in the “liberal” East Village seems to have such a distaste for “foreigners”.

@Dean: I don't like being called narrow-minded and ignorant, for just stating that there is a simply-named bar in the East Village, would you? Also, when you call someone a prick, that's a lot more inflammatory than anything I wrote in this thread. I don't resort to calling people names to make a point.

I've always thought Negative Four was terrible name for a bodega. It's classist against people that can't do math. For years I called the place "Seven minus Eleven" and was made fun of by my peers.

@Mary - FYI, I find both Au Bon Pain and Chipotle to be bland, boring chain establishments, neither of which I patronize. And also FYI, my post was not intended to be a diss on Asians - or anyone else. My beef, which you misinterpreted, was that all we ever get any more in the EV are fancy joints with fancy names, nothing like a diner or coffee shop. Not sure how that makes me a racist, but I guess you, like Kurt, are one of those people who fling the term around like confetti on New Year's Eve when you self-righteously decide someone has said something you consider derogatory against some ethnic group. Please point out where, in my very brief post, I maligned ANY race or people, would you? I'll wait.

And Kurt - That's the second time you brought up what a racist I am for my crack about Arun Bhatia, whom I know is from India; I also know that Lahore is in Pakistan, and I EVEN know there's bad blood between those two countries. Pretty good for a xenophobe, huh? Not sure why you're so obsessed with that comment, but what went over your head was that I was trying (maybe not too successfully) to draw a comparison with another place where he would not be welcome, and should not have the right, to come in and destroy historic buildings that are part of the long-time fabric of the area so he could build something that would enrich himself while benefiting none of the locals. That was ALL I meant, so if thinking that and expressing it the way I did makes me a racist in your eyes, then too bad. But I'll live.

However, both you and Mary should know that I have traveled - and cheerfully eaten my way - through places like Vietnam, Cambodia (twice), Laos, Thailand, Hong Kong, Macao, Japan, Jordan and Iran (yep, Iran - went there on vacation in 2000). I spent six years living in and traveling through Western and Eastern Europe and the Canary Islands. I speak fluent German and decent Spanish. I had plans to visit Syria (Crusader castles) and Libya (Roman ruins) before Arab Spring made it, for the moment, impossible. Southeast Asia is my favorite area of the world, and it has some of my favorite foods, but that doesn't mean that every now and then I wouldn't like to see a new place open where I can just get a bowl of soup and a couple of eggs and home fries. (And yes, I KNOW there are places like that in the EV already, but we have plenty of restaurants serving duplicate foods, yet each different in their own way.)

So the reality is, I'm the farthest thing from a racist xenophobe you could get. But interestingly enough, even though you two knew nothing about me, it still didn't stop either of you from publicly insulting me with stupid knee-jerk accusations because you separately decided I was something that I most certainly am not. So tell me, who's the real ignoramus(es) here?

BTW, if any other EV Grieve reader (besides Mary and Kurt, that is) thought I was slagging an ethnic group, then I sincerely apologize. That was never my intent.

I was waiting for Lisa to chime in before telling both Kurt and Mary that I know Lisa in real life as a friend and you couldn't be more wrong in your evaluation of her as a person.