Someone has been posting these flyers of Kenneth Moreno and Franklin Mata, the two NYPD officers acquitted last week of charges of raping an East Village woman.

I spotted the flyers along the Bowery and Second Avenue... these were outside the Mars Bar... 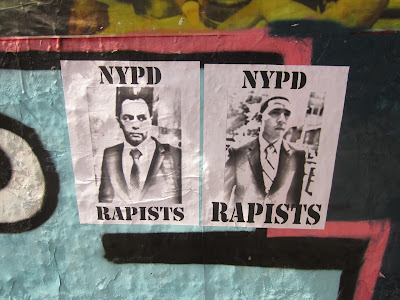 The Voice has more on Friday's protest downtown. The Post has the latest ugly turn in the case today, in which the ex-wife of Moreno calls the rape accuser "a money-grubbing liar."
Posted by Grieve at 11:05 AM

And what is the wife, other than an enabler, in denial of her husband's predatory behavior?

I see the ex is as classy as her thug of a husband. They must have made quite a pair while they were together.

Lisa, if you read the article (or even just read the headline), she's not his ex-wife. She is his current wife.

GOOD. Warn the public. Two predators on the loose. We need to memorize their names and their faces.

And that wife needs to shut it. She's not doing her husband any PR favors by screeching at the victim.

Sorry about that Lisa. I misread the item...