Buses, bouncers and a mysterious Avenue B party spot

For the second consecutive weekend, crowds have flocked to the space next door to, or on top of, the former Le Souk at 47 Avenue B. However, this time, it appears the gathering is far more organized. 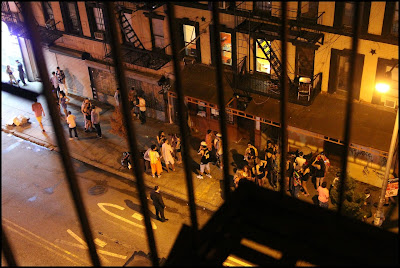 There are some guys working the door... 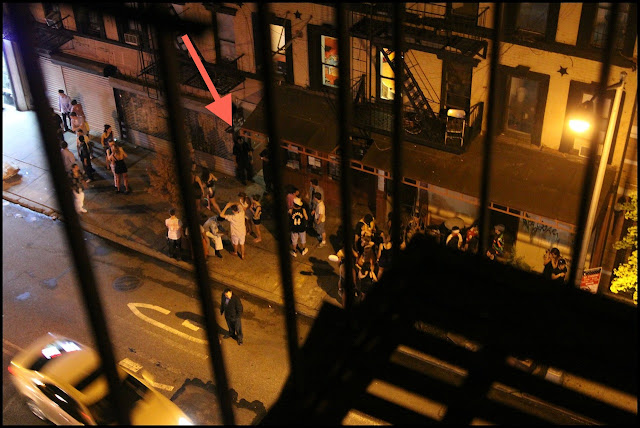 ...and there were three party buses full of party people... 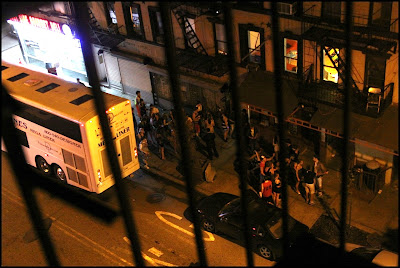 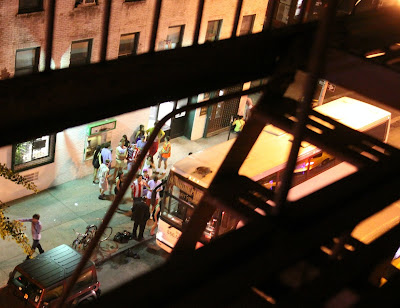 A resident took these photos around 3 a.m. early Saturday. The resident noted: "It appears they show up by bus (many buses) and disappear into the doorway next to Le Souk for a few hours. Then, drunk, they filter out later on to the waiting buses. There are some chaperones or minders who herd them like silly teenage sheep. No idea what it's all about. I just know they are wicked loud and young."

A reader left this comment, which makes it look as if the party went on for two nights (or mornings):

There were 3 "party" buses on Ave B Sat night. When I called 311 at 3 am I was left in a never ending holding pattern. Then I hung up and called 911. The operator hung up on me. That's my city now. Endless suburbanite spawn in large groups shipped in on buses. Annoying transplants doing annoying things on my dime as they claim expression of themselves. I just want to know, is there no person in the town you were raised that misses you? It is a large country we live in, why do you all move here? It's not that great, and it's full.

The State Liquor Authority terminated Le Souk's liquor license in October 2009. While this all may not have anything to do with Le Souk, who has tried to hold parties at this space in the past, several people did sign on to Foursquare from 47 Avenue B on May 21.
Posted by Grieve at 7:00 AM

time to investigate. so who in the Grieve demographic stays out late enough to infiltrate this place?

It could be some sort of subversive group using the cover of hedonistic youth party. Do they look Russian?

What about calling the Ninth Precinct and putting it on their radar?

I saw a sticker on a telephone booth on Houston Street; in a take-off on the tourist t-shirts, it says "Go (Heart) Your Own City". I couldn't have said it better myself.

"No idea what it's all about. I just know they are wicked loud and young."

There was a party bus parked on East 5th btw A-B around 2:30a Sat night. with an ambulance in front of it...a young girl had to be taking off the bus because she was convulsing from alcohol poisoning...college kids celebrating finals and graduation or something...

Uh... the dude called 911 about a bunch of drunk kids milling by a charter bus? What a fucking idiot. You know people need 911 for real emergencies right? Like when people get robbed, shot, raped?? You mock these kids for being from the suburbs but then complain about the noise? Sounds like YOU need to move to the suburbs. The 911 operator should have given you the what for. Moron.

Next time, that bus needs a 12 pack of artisanal eggs. Pronto!

Also, @anonymous 10.42 "Sounds like YOU need to move to the suburbs." No, screaming, hurling drunken herds of narcissistic DBs is such a suburban thing. I am so tired of hearing this mantra from rubes like you. To be cool in Manhattan is to move stealthy through the night. Like the B-2 bomber. Go back to your mall!

A simple google search led me to this event listing with links to photos. Maybe??
http://www.thescene.com/event?event_id=91239

Crazy Eddie knows of what he speaks.

The Intern of EV Grieve said...

I am out late enough to investigate, but don't fit the demographic well enough to infiltrate, sadly. Or not sadly.

@Crazy Eddie - Succinctly and thoroughly well-put. True NYers would never dream of making such inebriated spectacles of themselves, which Anon. 10:42 would know if he were from here.

I've been known to make an occasional inebriated spectacle of myself...so they tell me. However, I always stagger home silently. I'm a classy drunk.

this is it, it's the end. we're living in it. Manhattan is uncool now. Take away the history and what you have is just middle of the road. It's the age of the douchebag. Manhattan might be the financial capital of the world but its no longer the cultural. This city is getting left in the dust. Most of the artistry and creative energy got priced out a while ago, so it was ripe for a takeover. Dorms, party buses, superdives, fro yo, foodies, this is just the way it is now.

Grew up here, as did my father, his father and his father. We may have had excessive amounts of alcohol, illegal narcotics in one evening. Yet I take my heels off at 5 am when I walk up my six flights of stairs. Know where the babies live in my building, pick my errant cig butts off the stoop. These animals are not the direction I wish my neighborhood to go in. Nor my country. We have officially lived up to the stereo type the world has of us..good job self important little shits borne of baby boomers. Enjoy the mess you made, then go f*ck yourselves.

I will soon move to YOUR hometown and puke on your mother's flowerpots. Then invite 200 of my friends to scream outside her house in the middle of the night. Just for fun , transplant loser. Why is one community more acceptable to be an asshole in than another? Not the spirit of the East Village. Free art, expression never meant freedom to be an inconsiderate spawn of baby boomers. Watch out a-holes- we ARE moving to Long-Jersey-Ester-Eticut, and acting the way you found acceptable in OUR hometown.

The bottom line, don't call 911 over drunk loud people. It's the biggest waste of time & money ever.

You are right , I should have gone out there with my baseball bat. I'm guessing the police would have shown up then. God forbid someone ask the piece of shit kids that disturb the neighborhood to have a little respect.

Excuse my rant on over entitled children of asshole suburbanites. But seriously, how can anyone dismiss over three hundred under twenty years olds being drunk, loud and disrespectful on one block. Fine, it's not a police issue. But their asshole permissive parents are doing nothing. Should I crack their heads with a baseball bat? Probably not, but how can we stop our society from destroying itself? I saw "Jersey Shore" once, and all the housewives maybe 10 min each...Has anyone pondered the thought that when we are old these are the people that will be running our city and country? Mock me for caring, but good luck when you are a senior and these morons are the ones in charge.

Mystery solved: post-prom parties. It's that time of year and I definitely don't think the owners would risk the fines for serving alcohol in here again.