That was fast: Nicky's Pho and Lingua closed after just 3 months

In early February, we noted that Nicky's Pho had opened on East Fourth Street between Avenue A and Avenue B... 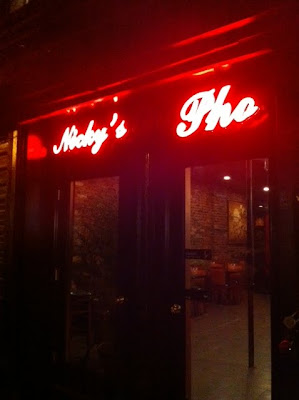 Grub Street reports that they have closed. Says co-owner Billy Dang, "I made a big mistake for taking the spot, because there’s not enough traffic and it’s not making enough money."

Bet the people opening the former Tonda space down the street will love to hear that lack-of-traffic line. Meanwhile, Nicky's Vietnamese Sandwiches remains open on Second Street just east of Avenue A.

Per Grub Street: "Perhaps the menu, which offered a slew of innards, like tripe Florentine, lamb sweetbreads, and tongue, was a bit too adventurous for East Villagers' tastes."
Posted by Grieve at 4:18 PM

Yeah, I noticed that the Pho spot has been closed, let's just hope that this doesn't affect the original location because I can't live without those sandwiches!!!

The block isn't the issue. Both In Vino and Perbacco are packed most nights. Maybe it's the vibe of the place? I love Nicky's sandwiches and that block is just as "slow." The place just didn't look welcoming when you walked by.

I've heard the Tonda space has been taken by the dudes that run Death and Co etc. As much as I hate the scene they draw on the weekends, I am sure they'll do just fine.

We don't eat innards because we can afford a nice steak or lamb roast. Innards: that's what hot dogs are for.

Just saw a note on the door of Octavia's Porch on Ave B that they are closed for good too... in the same space where Chabela's lasted less than a year before it. Rough day for restaurants.

Went to the Pho place once when it first opened--it was pretty decent and I tried to go back twice. however, it wasn't open the first time (on a weekend, midday), and the second time when it seemed open at around 12pm, we were sent away because the cook (?) wasn't there. seemed like a poorly run business.

nicky's was at least 2 months behind in back rent ($2,700/month according to a wet piece of paper/notice from thelandlord that i found in the hallway of the building). the same landlord pushed the tattoo parlor out by trying to jack up their rent to $10k. the building (215 east 4th) is poorly run and poorly maintained, i can only imagine what nicky's had to put up with. we as tenants barely can get anything fixed or cleaned, which we need often considering the onslaught of messy (and ignornant, and loud) 20-somethings who've moved in over the past two years.

I'm not saying one can't "make it" on that block (one can). But it is the shittiest block in the whole neighborhood. (sorry, but true)
I would open a business on any block except that one.

Right on Anonymous 2:28: A small business has no ability to take root when the rent is so fucking high. The tettoo parlour was there for ever, paying rent the whole time, until a greedy corporate landlord forced them out. That space stayed empty for more than a year before Nicky came along.

I once rented the right side of 215 when things were really bad on that block (major drug dealing, drive-by shootings, apt. break-ins, cars broken into, etc.)

I wanted to renew my lease, but the landlord tried to jack me up, so I split. Afterward, the landlord actually called me repeatedly, screaming like a little baby, whining that I had betrayed him!

My old space stayed empty for more than a year until he found someone else to take it. The new tenant paid HALF of what I was paying!

Scumlords deserve what they get....