Eater reports that the team behind Brooklyn Flea and Chelsea Market regular People's Pops are opening a new pop-up location at 5 p.m. today. The stall is officially at 118 First Ave., which is actually between Caracas Arepa Bar and the corner deli. Per Eater, they'll serve "fresh, locally sourced fruit pops and shaved ice. They get their fruit straight from Greenmarket, so expect the seasonal flavors to change constantly."

Late yesterday afternoon, a worker was on the scene preparing the space, which promises to be the latest Seventh Street venture to attract people to wait in line... 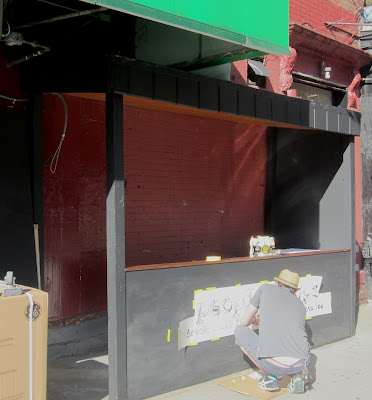 Looks to be a busy icy season... you have Ray's on Avenue A ... NYC ICY at 171 Avenue A ... not to mention the numerous men selling shaved ice on the corners, such as on Seventh Street at Avenue B.
Posted by Grieve at 6:38 AM

because that corner really needs more crowds of oblivious guys in straw fedoras and girls texting into iPhones.

Here, here. The graduation from food truck and/or flea market food stand to temporary brick and mortar is not always warranted. I had these ices at Madison Park Eats and they were overpriced and god-awful. Think about it: Why spend $3 or $4 on a few tablespoons of frozen-"flavored" water. NYC ICY is way way overpriced as well. Where do these people get off charging so freakin' much? I say go to Rays!

This is more stuff taking up sidewalk space, right?

dont forget Ralphs opened on Irving Ave in 20's! not the EV but still the best Italian Ice EVER!!!

next thing you know there'll be applying for a liquor license to serve alcoholic shaved ice, you know: vodka infused pineapple shaved ice; the bubble gum pink martini; butterscotch (with real scotch); the green appletini...and so on...

and i think ev grieve should open a pop-up shaved ice joint too, serving from the icicle audi ice...

(conio -- is the word verification for this comment -- how fitting)

esquared, you nailed it with the booze-infused ices. nailed it.

The local shaved ice guys on different corners in the EV/LES sell a great coconut one for a buck. Let's not forget them. They have been here longer than many people would believe. Of course there is Rays. I wish he kept the ices at a buck but he had to raise his prices to $2.00. They are the best. Ray--a shout out--make the chocolate one again please.

It's still crazy to me that people will pay so much for shaved ices when you can literally get them for around a buck each from the old-school guys who have been doing the shaved ice thing for years!

I'd actually enjoy a shaved ice with vodka.

I think I will just buy one from the buck-an-ice guys and enhance it in the comfort of my living room.

Jeez its amazing what people will whine about! I knew these guys when they were making these pops in their apt and selling them at flea markets, now they have their own shop and chelsea market, quit their day jobs and put all their money into making this business. God forbid they have a pop up shop for two months selling popsicles! Save they crying for pop up Star Bucks

Alcoholic ices? Isn't this why the Southland corporation made Slurpees?

In Hawaii it's called Shave Ice and they know what they're doing with the ice and the flavors.

Lemon Ice King of Corona is the one that steals my heart.

the ice bars are fabulous
i had a red plum with basil
he flavor was intense and sweet
the price is high
but it was almost worth it
once in a while, not too often