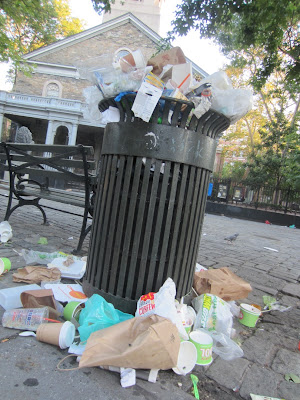 Welcome to St. Mark’s Church in-the-Bowery, the oldest site of continuous worship in New York City and the second oldest church in Manhattan. Not only is the St. Mark’s campus a beautiful collection of buildings and burial grounds, its unique and interesting history is quintessential New York. The site is officially listed on the National Register of Historic Places and was designated a New York City Landmark in 1966.

This is a very usual site that seems to have gone completely out of control since the opening of 16 Handles. I walk by here several times a week at 5am and let me assure you - THE RATS RULE THIS PARK! I used to read a book there in the afternoon once in a while but no more.

one of the problems is that the city, in its wisdom, decided that less garbage cans will crate lees garbage and there are no longer receptacles on every corner.
in the subways the mta has decided that people finding fewer cans will take their garbage back home.
who are these rocket sciences that do nothing but create problems.
the mayor wants to encourage tourists no matter what the cost.
overflowing garbage, filthy streets, proliferation of rats! he sure knows what he's doing.
anything he does not like he says will discourage tourists (OWS), and anything he likes will encourage them (sick carriage horses).
he bought the election and is ruining our city.

This makes me so mad, and not only because this church is one of my favorite places in the world. I ask honestly: Why, if a trash can is overflowing, would one choose to toss his/her shit on the pile rather than hold on to it for the one, two, possibly three blocks it might take to find another trash can? Or in other words, why be a pig?

LvV you are correct
most folks just toss their trash on the street. any street, can or not. church or not. have you see the trash in front of our schools?
then we have those courteous folks that empty their cars onto the street and/or curb.

some of the sanitation workers are not much better. letting trash fall to the streets and leaving it there and my favorite, playing basketball with the garbage can covers and the tree pits.
not at all good for the plants that people bother to tend.
it is all very discouraging.

I saw a DOS car on 1st Ave pull over near 4th St where the driver then tossed his coffee cup onto the sidewalk (garbage can was about 20 feet away at the corner). Two kids saw this and yelled at him to throw his trash in the can. He just gave them a dirty look and sped off. I couldn't believe it. That's the mentality we're dealing with.

You think that’s gross, just go to Lux’s FB page and see the trash at Stuy Town's “recycle” bins. Which sort of brings me to my next point. This Friday night, Saturday night, Sunday night and Monday night, the EV will be overrun by screaming hordes, wearing masks, walking drunkenly in the streets, dumping trash, pissing and hurling everywhere, blocking the sidewalks and wearing masks. Do ya think this crowd will be pepper spayed and arrested? I think not.

blue glass, I haven't noticed the schools being trashier than other places but maybe, depending on the age of the students, they just don't know any better yet, or are used to their parents picking up after them? Although my momma would have given me the what-for if she ever saw me being a litterbug. Thankfully I came up during the era of Give a Hoot, Don't Pollute and the crying Indian PSA and so was a fastidious kid anyway, heh.

The situation outside the church is another thing though. So much of that crap is from 16 Handles, which, like the Magnolia trash situation over in the WV, is caused by idiot adults. Gah. What is wrong with people? And Bloomberg's plan to eliminate trashcans in the subways is beyond asinine. I really hate that guy.

Goggla, I like that story! It's heartwarming to know that litterbug policers live on in the younger generations. Good for those kids!

Well duh, certain subspecies of human are some of the filthiest animals on the planet. Add in some self-entitlement and self-centeredness and it's no mystery why certain areas of our neighborhood are so filthy. When you stop expecting responsible behavior, scenes like this are not so aggravating. sad but true.

Very sad. Also, whenever I see people wandering around with those huge buckets of whatever that vile glop is, I can't help but think of them as farm animals with feed buckets. Apparently they have all the manners of farm animals as well, judging by this photo.

After all my years in NYC, I still can never get used to the trash. Can't we come up with a better system than mountains of trash bags and permanent trash cans blocking the side walks day and night? Other cities manage this; NYC should do better.

To all those ranting about the mayor, M.T.A. and D.O.S. - it's the Parks Department that collects and cleans the Abe Lebewohl Park in front of the church.

If you're bothered that a two month experiment at a subway station that temorarily removes some trash cans is taking place then complain to the M.T.A. Stay focused.