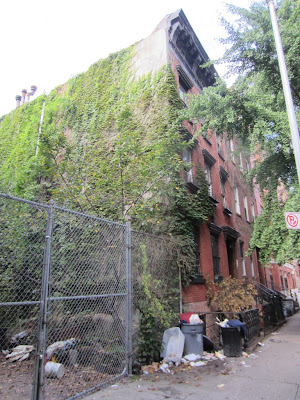 Back in August, Curbed reported that a Karl Fischer-designed, 33-unit apartment building is coming to 316 and 318 E. Third St., which is between Avenue C and Avenue D. (Still waiting for those renderings!)

In May 2010, we posted info about the sale of the four-story brick townhouse. It was on the market for $3.995 million.

According to the listing, "The townhouse is surrounded on 3 sides by bucolic garden, open lawn and mature trees. The townhouse itself is not landmarked, and there are approximately 22,900 buildable square feet available to the purchaser of these combined 2 lots, offering myriad opportunities for creative expansion."

Anyway, it was just a matter of time... last week, the demolition permits were put on file for the house at 316 E. Third St. 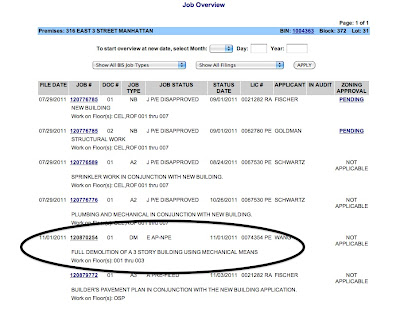 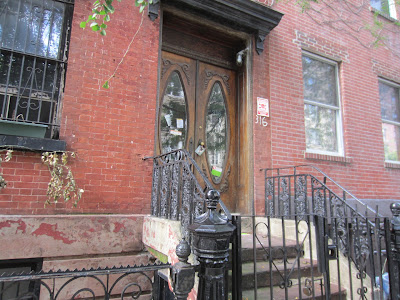 Preservation groups had worked to try to protect 316 E. Third St., a circa-1835 house bound for the condo after life. Unfortunately, the Landmarks Preservation Commission (LPC) rejected a hearing on the matter in September, according to the Greenwich Village Society for Historic Preservation website. 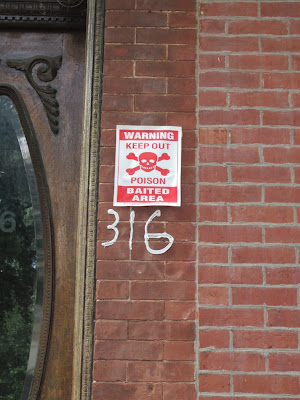 Several readers had noted that former Community Board 3 member Barden Prisant owned the home. He confirmed this to us in a message via Facebook at the time.

According to an article on living in Prospect Park South in the Times dated Oct. 6, Prisant and his wife "decided to sell their house in the East Village because a tall building was to go up next to their beloved backyard." 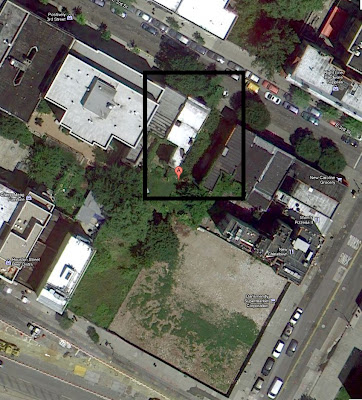 Forgot about this beast in the works for that empty lot above at Houston and Avenue D:

Back to the Times article: "In addition to uprooting their 8-year-old daughter, the move would involve transplanting the garden that Mr. Prisant had cultivated over 20-plus years. It had peach, apple, cherry and pear trees, none of which they wanted to leave behind. Factor in the barbecue, which Mr. Prisant likes to use year-round, and it was clear that no ordinary place would do."

As the article points out, they found a suitable new home "a block and a half from Prospect Park’s parade grounds."
Posted by Grieve at 6:59 AM

I'm from Schenectady, from the oldest part of that little city, a neighborhood that got federal historic designation years ago. Most of the houses are 19th century homes, some go back further. One or two to the 17th century. 1835 would be considered a ripe age back there.

A couple of years ago, an old house on a not very remarkable block was literally falling down...at least one side of it, anyway. A local contractor bought the place for a song and wanted to tear it down. Little did he know that was simply impossible in that neighborhood. Instead, he got a partial grant from the historical commission and, doing the work personally, rebuilt the collapsing wall. As the story progressed, it turned out that one of the men who built the Merrimack steel-hulled ship in the 1850s lived there for a time.

This is Schenectady, for God's sake. The butt of countless jokes in old movies, even in its heyday. But in New York City, the 'greatest city in the world', we destroy healthy, beautiful old buildings right and left to put up ugly glass pieces of crap that will be condemned as uninhabitable within 30 or 40 years.

i used to live directly next door and cannot belive this beautiful house will be torn down. what a shame. and that the owners are on the community board. FOR SHAME Mr. Prisant. Couldn't you at least put a stipulation that the building cannot be demo'd after purchase??? instea, your listing is outright beckoning for the wrecking ball.
real classy exit you're making here. no, seriously. nice move.

I live across the street and I was hoping that living this far east would save me from the noise of new condos going up. It is a really pretty building too.