[EVG Flashback] Celebrities are just like us! (Dive bar edition) (aka: OMG! It's Keanu!) 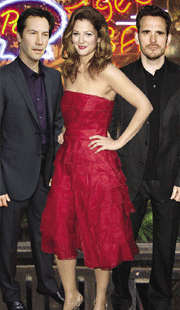 According to this week's Page Six Magazine, "stars are forgoing getting trashed at clubs —- and seeking a far trashier scene." Like bars WE like to go to! And so the magazine features six such places where you don't have to pay $12 for a bottle of beer: "Pull up a stool to New York’s greatest, and grubbiest, dive bars." (Their words, not mine.)

Here's their report on Joe's on East Sixth Street:

Alphabet City Dive-y-est Element: Gunk-covered floor and bathrooms tinier than airplane stalls — all presided over by the toothless but friendly day-shift bartender, Tommy.

Celebrity Customers: While the former speakeasy hasn’t changed — or perhaps been mopped — since owners Joe and Dot (who refuse to give their last names) took over in the ’60s, stars have made Joe’s their dirty little secret. “Drew Barrymore comes here and so does Matt Dillion,” reports barfly Magda. “Keanu Reeves was just in last month, playing pool,” she adds. “Celebs are sick of getting their covers blown and want a taste of reality,” says Tracy Westmoreland, owner of legendary but now-closed dive Siberia. That “shipwrecks” like Joe’s are more popular than ever signals “the new golden age for dive bars,” he adds.

I understand celebs wanting to lay low but the breathless excitement with which retarded rags like the post report on this stuff is just embarrassing. Hey how about get a life.