On Saturday, November 19, Fourth Arts Block (FABnyc) will present Groundbreak, the inaugural exhibit in a rotating public art program for Artist Alley @ Extra Place. This exhibit is the latest in a series of temporary art installations in atypical locations in the East Village/Lower East Side through FABnyc's ArtUp program.

FABnyc recognizes Extra Place as a cultural marker in New York City's Punk and No Wave scene and its potential as fertile ground for a new generation of creative exchange. Abe Lincoln Jr., Jon Burgerman, and Ellis Gallagher are New York based artists who will reclaim the concrete sidewalk as their blank canvas.

And Bobby Williams has been keeping tabs on the progress for part of the week... 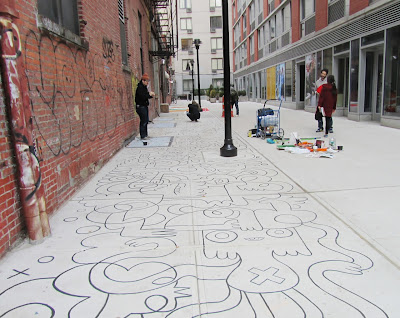 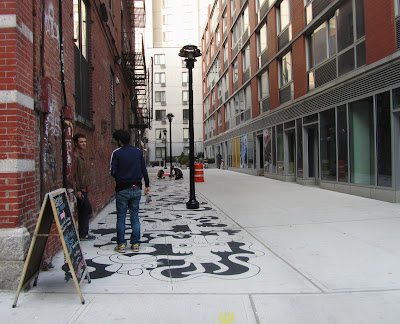 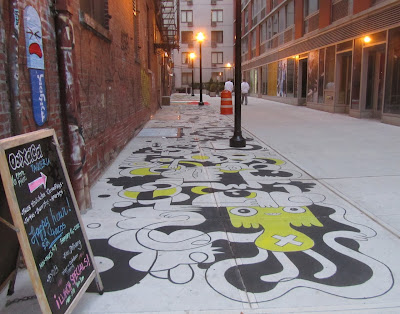 All this explains that "birthplace of punk" art.

Anyway, doesn't seem like too long ago when workers were removing the street art/graffiti from here.

I reclaim the concrete sidewalk as my pillow.

"This exhibit is the latest in a series of temporary art installations in atypical locations in the East Village/Lower East Side through FABnyc's ArtUp program."

You couldn't make this shit up if you tried. So FABulous.

This does nothing but support the gentrifiers. Please stop doing this. These people go to the enemy such as Avalon Bay and get their support to do it.


This only helps to further gentrification by creating some kind of common ground between the developers and the community.

Not only will the art not do anything but it will also make things worse by making the developers seem like sensible people. you understand. No sweat off their backs.

It's sad when an individual who probably doesn't know anyone at AvalonBay calls them "the enemy." AvalonBay thought of the concept to connect with the community and support local art and funded the project. They worked with a non-profit and their goal was to help the local artists and the community have something uniquely special for others to admire. A dual goal was hopefully the artists get recognition and helps them succeed. Whoever wrote the previous post is a sad individual and blames everyone else for their shortcomings. Take accountability for your actions and wish others the best to succeed, no one is after you or "out to get you." - except me, I'm gonna get you! Cheers...

"AvalonBay thought of the concept to connect with the community and support local art and funded the project."

What you really meant is:

"AvalonBay thought of the concept to try to attract more yuppie/yunnies who, like, yah, love art and wine bars and stuff!"