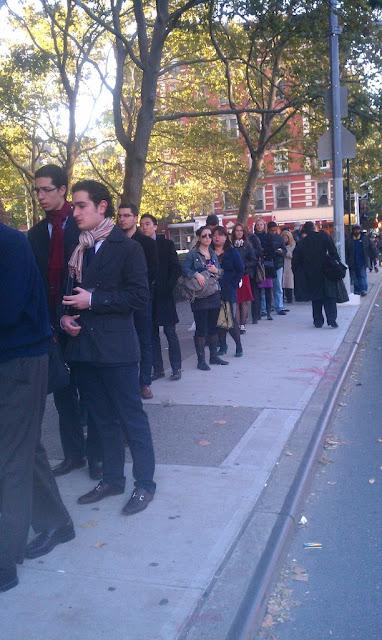 The M15 Select Bus Service debuted back in October 2010. We haven't heard much about it since then.

However, in the last three to four months, EV Grieve reader Jenny notes that there are problems with the stop on First Avenue between Second Street and Third Street.

Per Jenny: "Nearly every morning one of the two machines is out of service and there are lines of 60-70 people at a time. You have to wait 15 minutes just to get through the line, and then sometimes the bus will wait another 10 minutes for others to get on the bus."

One way to bypass this: Jump on the bus, hop off at 14th Street to pay where there are more machines, and get back on the bus. For Jenny, this worked a few times — until the MTA police caught her without a receipt and fined her $100. She explained that the machines were down and showed them all her previous receipts. But, you know.

A solution: Add a third machine to this stop on First Avenue. Or at least send around crews more often to repair the machines.
Posted by Grieve at 8:00 AM

or a they can have a conductor at the bus stops, or in the buses (like the ones in lirr and njtransit), instead of that mta police, with a portable machine that can spew out tickets when the subway card is swiped, and of course cash and coins in hand for change for those who don't have a subway card, esp. during rush hours

i like the express bus, it's quick (albeit it can get crowded on rush hours). but these lines to get a ticket takes the express and service out of the select bus service

The problem isn't just with this stop. Those machines are always out of service. Other than that, I love the select bus.

Call your City Council member, Member Rosie Mendez, @ 212-677-1077. Someone at her office can get the MTA or DOT or whomever by to repair these things more often.

You folks don't get it - when they created this "system", out-of-service machines are part of the plan. I think I even predicted this in one reply or another. They know they will be able to give out more tickets-stealth tax. Its the same thing as when the conductor shuts the door while people are still boarding and the cops stand there and hand out tickets to people trying to get on 'for holding the doors'. If you have a valid MTA card, you should be able to board the bus. But that is too simple, isn't it. They can't dish out more fines. It is pure Virilian - when they invented the ticket machine, they also invented the broken ticket machine.

So that's a photo of the neighborhood demographic nowadays? Wow.

This is maybe--maybe--an indication that the feds and Albany should get off their asses and find the money to fund Phases 3 and 4 of the Second Avenue Subway.

Stupidest bus system ever designed (what would you expect from NYC?) All they had to do was look at any of a handful of systems throughout europe to figure out how to do this properly.

and for those folks not close to an express stop and/or going to a local stop the wait for a bus is eternal. the local buses are mostly filled with seniors and others that find the walk to or from a select stop too far to walk.
seems that every improvement in this city is a way to cut services and jobs.

this is how the MTA makes money. they make sure there are few machines (so they can break down) and have their roving security team ready to get you.

the MTA uses fewer buses, buses that make fewer stops, yet they make boatloads of money, how? not through the farebox, but through fines.

@Anony 12.28-Hear, hear! Well done. Looks like the check in line for the Bowery Hotel.

"As the Lower East Side emerges as New York City's most vibrant new boutique neighborhood; the Bowery Hotel sits in the epicenter of the transformation in ..."

Anonymous Axis of Eville said...
i had no idea so many people were so lazy they couldn't walk 500 feet to a far faster form of transportation

open your stupid eyes, take a message to your slow brain - those lazy bastards that cannot stand in the heat or cold while they wait the extra hour it can take for a local bus - or have trouble walking the extra 500 feet are usually the elderly or disabled.
gosh, it was so lazy of them to age or become disabled. let's throw them out with the other worthless trash that seems to be filling this neighborhood up with thoughtless, loud, useless people.

I know it's beside the point but God that line is depressing. I'm with Anonymous 12:28 ~ East Village looks done for.

This is the 21st century. Almost everyone on that line has a cell phone and should be able to pay for their ride using the phone, and if they don't have a phone they can just buy tickets in a bodega. Instead, the MTA and the city are taking up precious public space with these silly proprietary payment kiosks. Unbelievable.