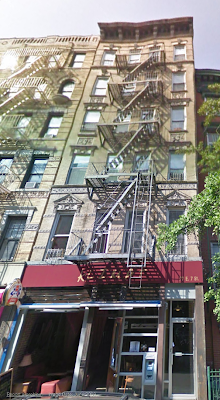 Public Advocate Bill de Blasio has released the 2011 NYC's Worst Landlords Watchlist ... and it looks as if one East Village building made the list.

At No. 29 in Manhattan: Robert Koziej, head officer, 77 E. Seventh St. with 110 total infractions. With 16 units in the building, that's roughly 6.8 infractions per apartment...

de Blasio's database contains 358 buildings owned by 317 separate landlords in all five boroughs. Topping the list: 1071 Home Corp, which had 1,187 infractions total in eight properties in the Bronx.

Looking at the records of this building, it seems that the complaints all come from two or three apartments. So that would be about 35 to 55 complaints per noisy tenant. Seems to me like this listing should be taken with a grain of salt, especially if you consider how easy it is to file complaints and all the DOB complaints that are all resolved as unwarranted.

Anon 9:54 - That seems a strange comment. Sounds like someone has an axe to grind. What records are you looking at that you can see who is phoning in complaints? If you're the landlord or somehow connected to the landlord, feel free to tell us your side of the story. Anonymous comments carry less weight!

evfl - No axe to grind, just curiosity. The complaints are public records, all of which are available at the Department of Housing Preservation and Development and the Department of Buildings. DHPD always notes the apartment that complains, while the DOB sometimes mention it. I was expecting to see something different then I did, which is pretty much all of the complaints originating from the same units.

That's true, I stand corrected. But looking at the complaints, 124 of the 136 complaints filed since Dec 2010 come from three different units in the same apartment line; the C line. This suggests a flaw in the heating (almost HALF are complaining of no heat)and hot water delivery in the building, not disgruntled tenants. Are you suggesting that out of sixteen units, more than one quarter (including the complaints from the two A line apartments, that's six different units)are "just cranky"? Wow! Are you SURE you're not the landlord?

Oh, and the number 110 refers to the number of housing violations, not complaints.
A Class: 41
B Class: 54
C Class: 15
I Class: 0
A, B, or C class, and have stringent deadlines of their own—ranging from 90 days for an A class, 30 days for a B class, and 24 hours for the “immediately hazardous” C class. I-class violations are violations in which there is a court order from a judge to correct them.

I am a tenant of 77 East 7th Street.
For many years I have lived under conditions that are far from acceptable.
Do you know what it feels like to have no heat or hot water especially during the winter months?
I am still waiting for a stove in which the oven works.
In the past year we have received several notices from Con Edison stating that the electricity in the common areas will be shut off because my landlord hasn't paid the bill.
I find it very curious that every time an inspector or the fire department arrives at 77 East 7th Street my landlord vanishes.
Violations are issued by inspectors not by cranky tenants.

if con edison advises that public electric (including to boilers etc) is to be shut off tenants have the right to pay the bill and deduct it from their rent(s). con edison is required to notify tenants.
it is a drag, but perhaps it is time to organize the tenants.
you do not have to wait for the landlord to take you to court for non-payment (like rent strike etc), you can take him/her to court.
i have lived with no heat and hot water, and with an extremely noisy neighbor. neither are tolerable.
good luck to you.

How could Ben Shaoul and his crew at PVE and Magnum Management not make the list or Harriet and Steven Crowman or those idiots at Icahn Realty, who run the illegal hotel on East 10th. Maybe it's because they turned the buildings they own into dormitories and the kiddies don't complain even though they pay 4k for a two-bedroom with shoebox size rooms.
How about we make our own list of the City's worst landlords. So obviously mine are:
Shaoul
Crowman
Lowry and Icahn Realty

I have been a guest of a resident during the winter. No heat, no hot
water and exposed gas pipes in the hallways. The landlord does his own maintenance which includes
plumbing and electrical work which is illegal except on
his own apt. Being a landlord myself, I am familiar with
the codes. He has no regards for the law which he thinks he above and no respect for his tenants. All you have to do is follow the rules and regulations and have
common sense and be nice and respectful. And follow
thru on your promises to your tenants. Strange these guidance has worked for me. Also why does these this
landlord work without posting his permits on the building? Also why is all his workers non speakers of
English? Why does he work often at night, all night?
The codes posted against are the only one known about.