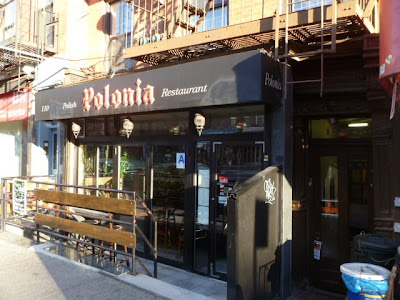 I am sorry to announce that on this Christmas Eve Polonia will be closing its doors permanently. We would like to thank all of our amazing customers who have supported us this quarter of a century. As all good things, Polonia's time has come to an end. It is time for new ventures. Keep your ears open for NYC Pierogi Factory. And again... Thank You!

We're curious about the sounds of NYC Pierogi Factory. (Except for the "Factory" part of the name, which The Meatball Factory has ruined for us.)

Jozef and Renata Jurczyk opened Polonia in 1989. Per the Polonia website:

Jozef and Renata were both born in Poland and traveled to New York City in the early 1980’s in hopes of following The American Dream. Arriving in the US with very little money, they both worked dead end jobs until saving enough money to open their own business, a restaurant which would allow them to share their culture and memories with other New Yorkers living in this dominantly Ukrainian and Eastern European neighborhood — The East Village.


In November 2010, their son, 22 year-old Paul Jurczyk, officially took over the restaurant from his parents. He worked to update the menu, taking it from diner food to something more upscale. Jurczyk hired a chef, the 26-year-old Olaf Wozny, who previously worked at Il Bucco, to help update the menu.

A few of us grumbled about the changes. However, as Jeremiah Moss wrote on Dec. 6, 2010: "There's still a homey feeling here that has little to do with the hyper-gentrification that is washing over the neighborhood ... This place is not going to attract any douchebag crowds anytime soon, so don't fret."

One rumor is that the landlord was raising the rent.
Posted by Grieve at 11:47 AM

Email ThisBlogThis!Share to TwitterShare to FacebookShare to Pinterest
Labels: Polonia

Oh no!!
NYC Pierogii Factory? Sounds awful! What happened to nice and cozy/homey? Who wants to go to a restaurant with the word "factory" in the name?

I am heartbroken. As a Polish gal, it makes me so sad to see this restaurant close. Hopefully they settle on a better name for their Pierogi restaurant...

Sad news. And as one who has punched a time clock in a real, "factory," it doesn't bring pleasant memories and it's not a good handle for a restaurant. Sorry to see them close.

That new name is terrible I'm picturing a shitty ugly sign and frat dooshes. C'mon Paul there's a way to do this.

Pierogi Factory. once again, the real is replaced with the ersatz, with some suburbanized idea of the real, one that even conjures assembly-line manufacturing vs. homemade. and in a few years, when the "The X Factory" trend is over, what will we be left with?

We will be left with the Cupcake Factory.

I am so sad! And here I only just got over Theresa's closing several years ago (still miss the cold borscht in the summer). Polonia had great brunches that were actually reasonable. We just went there a few weeks ago and I loved a group of people holding a hot and heavy conversation in polish with plenty of laughing.

May all greedy landlords be reborn as mall fixtures!

i'm looking forward to the starbucks. :|

Wow! Really sorry to see them close. The food was outstanding, current and cheap! I wish 'em the best of luck on the new venture. Before you get on their case, sonsider how many EV residents just moved here from the suburbs. They'll feel much safer in a place that sounds like a mall shop, and I'm sure the food will be better than they deserve.

I'm sorry to say it, but ever since the ownership change, this place has gone downhill. I used to eat there once a week, but after the new menu, the restaurant no longer offered my favorite dishes. Its delivery schedule also became more sporadic. I wish them no ill, of course. But ... sometimes modern "changes" aren't what they're cracked up to be.

Sad news. Last time i was in New York Paulie Dougherty arranged for me to pick keys to an apartment there. Had lovely food then and over the weeks I stayed. O Polonia you will be missed Sé Merry Doyle

Used to come here on Sundays with my Grandfather for breakfast, when I first came to NY. Really sad to see it go. The neighborhood has been changing for years now, but seeing this place go, for some reason, really cements that it's lost its roots.

We went every sunday night until they updated the menu. Homemade Polish food is what I came for and waited patiently for not something more upscale. The stuffed cabbage was just like my grandmother's. Please go back to the basics and please: No factory in the name or preperation of the food.