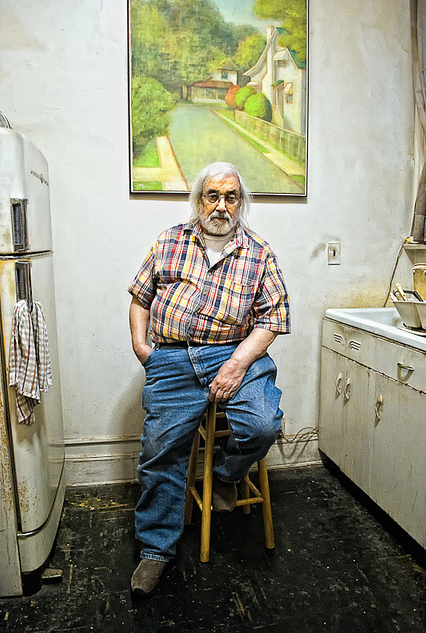 You may not know Markand Thakar, though it's likely that you will recognize his work. Several of his paintings adorn the walls of Sophie's on East Fifth Street as well as at Mona's on Avenue B.

Thakar, who was born and raised in New York, is 82. You can read about his life and work and view his art at his website, The Skunk Museum & Library.

The site is also full of his writings. Thomas D. Ward, who took the top and bottom photos on this page, offered this: "Those interested in a first-hand account of the New York art world from mid-century to the present will certainly find much to ponder."

You may also appreciate his vivid, street-level accounts of a native New Yorker in "Noo Yawk, New York." (You can access that work here.)

In addition to the website, he distributes his writing via pamphlets at the two bars the old-fashioned way ... 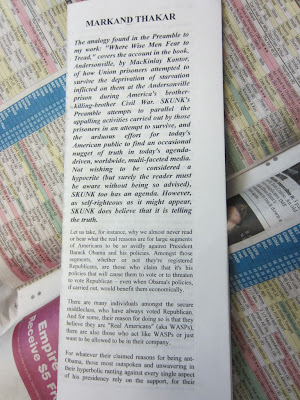 Depending on the day or time, you might even find him sitting at the bar at Sophie's or Mona's. (He's particularly fond of the Tuesday night jazz sessions at Mona's.) Why not say hello. 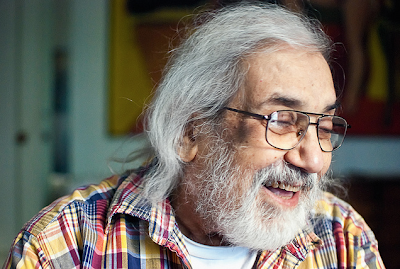 I will indeed say hello if our paths cross. He seems like an interesting and talented guy.

Wow, this is so great!! Wonderful write-up, seems like such a cool guy!

What a really, really, really great idea to profile one of the ever-decreasing number of interesting/creative/independent-thinking people who made this the wonderful neighborhood that it was. I hope it's the first of a series! Maybe readers can send in suggestions?

Please do send along any suggestions....

Nice post! Would also love to see more of the same.

Hey does anyone remember someone named Peter Ramijnokwsi (sp?). He was somewhat of a fixture around here in the 60's and 70's, deceased now but was my godmother's boyfriend and he used to tell me all these crazy stories about the hood. He even wrote an (unpublished) book of short stories and memoirs called "The Mayor of Avenue A" that I hope to find a copy of sometime to share!
God I just keep thinking about all those elderly folks at Cabrini.... breaks my f*cking heart.