Billy's Antiques closing on Jan. 1 for the next 10-12 months 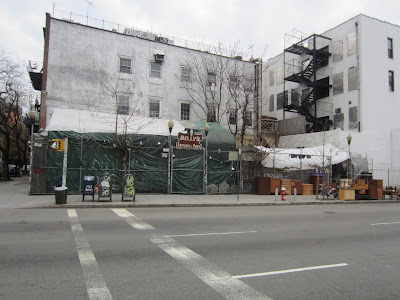 As The New York Times reported on Dec. 5, the iconic tent that houses Billy's Antiques on Houston at the Bowery is coming down to make way for a two-story brick building. Billy's will be moving back into the new structure. BoweryBoogie got the scoop that the tent will come down on Jan. 1.

We asked Billy for a few more details... He figures it will take about 10 to 12 months for the work to happen on the site... but he did confirm that Billy's will remain at the location. (Previously, Billy told us that the brick for the new structure is coming from an old factory in Massachusetts.)

And what will Billy do in the interim?

"I am a co-host on a new Antiques Reality show called 'Baggage Battles' on Travel Channel. We have already filmed two episodes in Miami and London," he said. "I got the part out of 60 Antique Dealers. The pay is decent and who knows — America might really dig Bowery Billy. Or might not?"
Posted by Grieve at 6:55 AM

Congratulations to Billy on the TV gig, I'm anxious to see it!

Good luck Billy! You're the best!