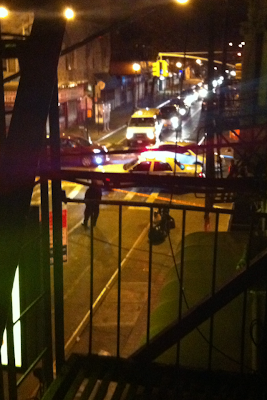 Multiple readers reported hearing gunshots around midnight on Clinton Street. BaHa said that she heard "four distinct gunshots" ... and the skies soon filled with NYPD helicopters ... A BoweryBoogie tipster heard "that someone was stabbed and someone shot off multiple rounds from a gun." The crime scene was reportedly at John’s Deli & Grocery at 37-39 Clinton St., where the NYPD locked down the area between Stanton and Rivington.
Posted by Grieve at 8:18 AM

Maybe it was just a quiet night, but I thought I heard something sounding like shots up by me on C & 6th a little after midnight.