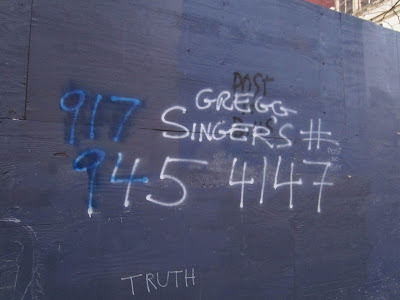 To be honest, we're not sure how long this has been on the plywood outside the former P.S. 64/CHARAS/El Bohio Community Center on the Ninth Street side... we noticed some messages after the holiday party/community potluck here on Dec. 18 ... but we didn't see this (Real? Fake?) phone number for controversial developer Gregg Singer, who owns this ... and whose plans haven't gone anywhere since he bought the place during a city auction in 1998... he is apparently pressing on with plans ... Scoopy had an entertaining item on all this a few weeks back at The Villager (last item).

Anyway, nice job of someone trying to paint over this ...