Mary Pupillo - 'A true relic of the East Village'

Mary Pupillo was a seamstress who worked for many years with Gino DiGirolamo at the Royal Tailor Shop when it was on Avenue A and 12th Street. She lived directly above the shop.

Her friend of 30 years Cynthia Chaffee called Mary "a true relic of the East Village." Cynthia shared some background about Mary:

"Mary was the real thing. She lived her entire life on the same corner at 12th Street and Avenue A at 441 E. 12th St. and across the street when she was a child. She would look out her window and always see where she grew up and where her sister died at 19 years old." 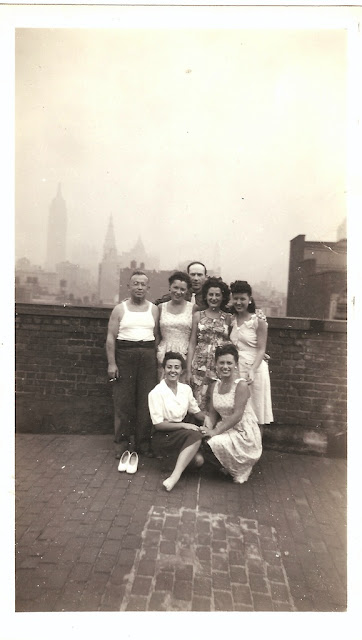 [Mary on the bottom left with her family]

"As a child she played in Tompkins Square Park. She remembers the sound of the horses on the cobblestone streets and selling fruit and vegetables and saying 'ice man.'" 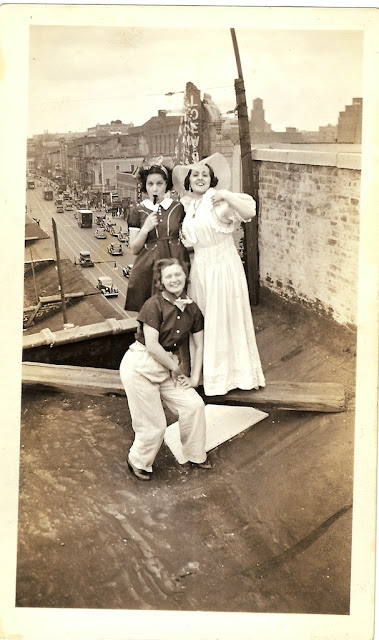 [Mary is in the hat]

"To the day Mary entered the Cabrini Center for Nursing and Rehabilitation on East Fifth Street at Avenue B two years ago, she continued to use the old-fashioned washing board to hand wash her clothes, and the hand-held iron — that you heat on the stove top flame to press her clothes. In the winter, she piled several bricks on her stove top and turned the gas burner on to heat up her apartment. (It worked great.) She sewed all her own clothes, including her hats. Mary was a character, both feisty and fiery." 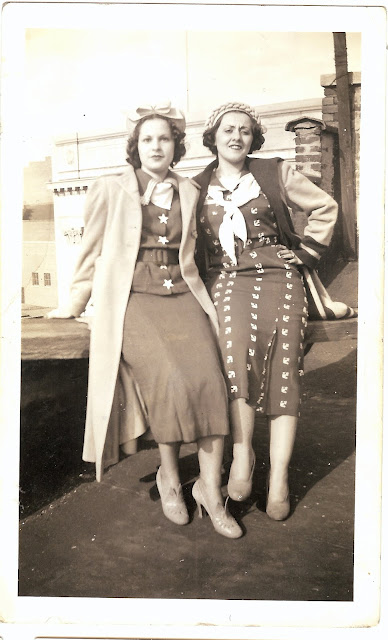 "She had deformed feet that prevented her from walking any distance... Later on in her life she had to drag a bag tied to a string around with her on the streets because she was in pain and unable to carry any weight.

"Mary took care of both of her parent's until they died, so she never married. She said that guys didn't ask her out because she had trouble walking and never could go to dances because of her feet."

"Mary went to Mary Help of Christians as a child and later attended Washington Irving High School on Irving Place and graduated. She was fluent in both French and Sicilian Italian. She loved opera and classical music, and could sing and act out word for word whole scenes from different operas. Her family was from Gange in Palermo, Sicily. She was full of the stories of the Italian neighborhood history."

"Many East Villagers will remember Mary. She was a fixture in the neighborhood."

Her funeral mass will be at the Immaculate Conception Church, 414 E. 14th St. near First Avenue tomorrow morning at 10 followed by a private burial. 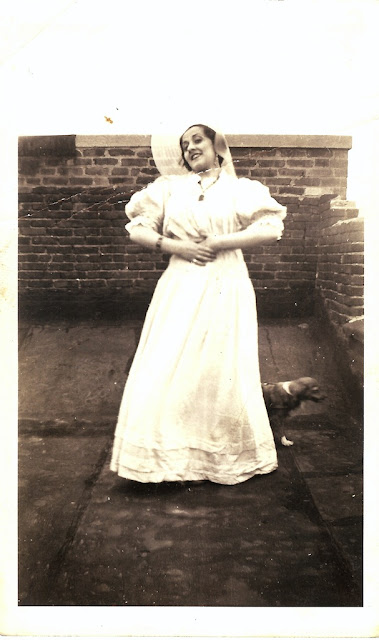 [Thanks to Cynthia for the photos.]
Posted by Grieve at 7:00 AM

Gino was a great tailor and a very sweet man. Thank you for posting this and the wonderful photos.

Beautiful piece. THanks for this.
(I'll have to remember the bricks when the heat doesn't come up (again) next fall)

Very evocative photos and a touching remembrance. It looks like the first photo was taken in Coney Island. What memories Mary must have had of old New York!

Love the photos. A great tribute to a lovely woman. Thanks for posting this!

Lovely, if not a little sad. The part about her feet and boys not asking her to dance broke my heart.

What a COOL lady! I wish I had met her.

Oh, dear. Another neighborhood treasure gone. I, too wish I had met the woman.

Great roof shots and a RIP to a great old school lady. Sad reference to the Cabrini Center, which will “vanish” soon. Looking at the roof shots, I got a “Somebody Up There Likes Me” vibe.

Another thank you for writing about her.

Does anyone know where that Loews theater marquee might have been? I though it might be on A since she lived there. I guess it could be anywhere in the city, tho.

I am also curious about where that photo with the Loews marquee was taken. Does anyone know? And thanks for this post, EV Grieve. It is amazing to read about a woman who spent nearly a century in the East Village.--CC

Beautiful photos ..young women sitting on the roof. Thank you for sharing this. My Dad for a few years lived on E. 10th Street where his Dad managed a hat shop on E. 14th Street.I wonder what primary school my Dad went to. This piece moved me in many ways.

Wonderful tribute to our long-term neighbor, Mary. Thanks to EV Grieve for running it, and to Cynthia for the great photos. All so evocative.

Another Thank You for this. This post made my day. Such a beautiful and sad story at the same time. Fantastic pictures of the old east village and happy times for her I'm sure. Reminds me of everything great about this city and how its all changing (and not for the good in my opinion). How many people will spend their whole lives in the same neighborhood anymore?

@anonymous 3:36-
You posted my exact thoughts. It's a beutiful, sad, New York Story .

I'm sad I never had the chance to meet this woman. What stories she must have had!

I'm curious about the Loews photo as well - could that be 3rd Ave?

I'm going to guess that in the Loews photo, Mary was on a roof at Ave A and 4th, making that the Hollywood / EV Farms theater. CinemaTreasures.org doesn't list any other Loews in the area around 1937 (making Mary 20 then). The rest of the scene is fairly low-rise, I'm also supposing that the most-right tall building is the Christodora House, to place this as a northernly view from just below 6th.

Such sparkle and sass, Mary! I'm sorry I didn't get to meet you before.

We need Bob Egan on the case of that Loews:
http://www.popspotsnyc.com

I remember her dragging her bag down Avenue A. I helped her a couple of times, but usually she refused. Such a nice woman. I love seeing these pictures of her.

Gino the tailor is still around. His shop Royal tailor is on south side of 14th St. Gino opens his tailoring and sewing shop at around 8pm and works through the night. Great guy, former wrestler, and true character.

Mary had a hard time making it up the stairs the last few years, and old age can make you paranoid and cranky. But she made an effort, and got outside and dragged that bag, and hung out at the Sirovitch, and YWCA for the lunches and company. I cant tell you how many light bulbs I changed for her, and how many times I helped her up the stairs. Respect your elders, it might be you tomorrow.

the Loew's Avenue B was in operation in the 30's and was on B and Fifth....it was replaced by the Cabrini Nursing Home.

Such a great story! What moxie she had...RIP, Mary. Thanks for bringing us this important and interesting slice of life.

I'm pretty sure that the Loews was on Houston. The street is too wide to be B. Plus I'm pretty sure I see The Kat'z sign in the background. Touching bio. I wish I knew Mary. I wonder how many more like her are still in the hood.

Thanks everyone for the comments. I'm grateful to Cynthia and Peter Chaffee for sharing Mary's story and photos. They sent a lot more photos, though I thought the ones posted here captured her the best...

Oh, well done her! What joy and grace and grit. I wish they could have had her funeral mass in Mary Help of Christians, where she went to school. May she rest in peace.

thanks to cynthia and peter. we missed mary so much, she's just one of a kind. we're just missing her beautiful laugh.

Oh Mary, how Baudelaire would have loved you.