Demolition starts tomorrow at former counterculture theater on Avenue B 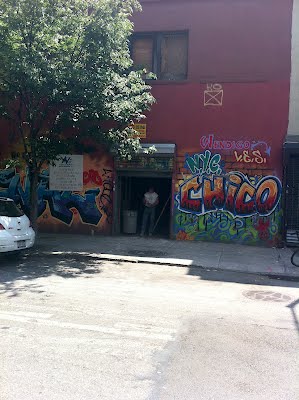 EV Grieve reader Ron Z. spotted workers and a new sign up this morning at the long-empty 185-193 Avenue B at East 12th Street.

According to the DOB, demolition will start here tomorrow...

Earlier this year, Brooklyn-based photographer Matt Lambros took shots of the space for After the Final Curtain, his photo site on abandoned architecture. 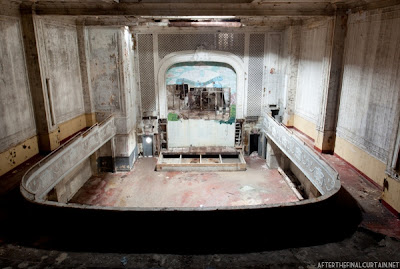 You can find his photos here.

7-story building in the works to replace former countercultural theater/church on Avenue B
Posted by Grieve at 2:49 PM

Email ThisBlogThis!Share to TwitterShare to FacebookShare to Pinterest
Labels: 193 Avenue B, The Charles

Your header should read:

That gents blog is compelling. Once these buildings are gone they're gone and will never be coming back. We'll only get ever more intense levels of blandness. Oh look, shimmering glass, trinkets and beads!

Everybody is in on screwing us!

They cry and cry about how the people on the bottom need help, need housing, need services and then they slap everyone in the face like this.

Why didn't they work something out with one of the local low income housing groups?
I guess maybe they didn't for the same reason that affordable housing groups offering housing, food, job training and drug treatment have sold their buildings to terrible developers or else they rent their commercial space to a high end restaurant or clothing boutique. Why should we give to any of these groups?

Goodbye, ugly old brown building, you will be sadly missed. Another once-vital part of our neighborhood's history ripped away for the sole benefit of the clueless and well-heeled.

People on the bottom should pick themselves up by their bootstraps and finally move to the outer boroughs. There's plenty of affordable housing on Coney Island or the Far Rockaways.
Mike Bloomie
President of NYC (thrice elected)

There's no counter-culture left in this formerly greatest city of the universe. We handed the keys to the city over to a scumbag.

Don't you mean God-Emperor of NYC? I truly believe that is how that Boston bastard sees himself, and also as our savior.

Demolition didn't go so well yesterday. A plate of glass falling out of a window almost hit a little girl on her way to school--well, it would have hit her except a worker ran out and shielded her with his own body. Bystanders called police, and now work seems to have been halted.

Total stupidity. They've got an elementary school around a corner, but I guess they figure injuries to little kids and lawsuits are less trouble than taking safety precautions and not pushing windows out rather than in.

This beautiful old theater could have been saved sooo fucking easily!! If Rev. Carlos wasn't such an uptight and short-sighted asshole, he could have had a free church space and community space for performances, movies, spoken word, etc, all funded by the three storefronts on the Avenue B side of the theater.

Or he could have sold it to a group which could have rescued and kept the theater alive for the benefit of the community.

Carlos told me that his uncle willed him the theater with the understanding that Carlos would keep it as a theater. Carlos has betrayed his uncle's will and the community.