[Updated] In case you were going to go look at those baby tigers today... 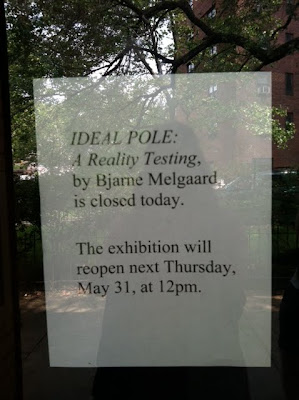 It's closed, via Matt LES_Miserable ... As Gothamist pointed out on Friday, two five-month-old female Bengals (Sonia and Tanya) were part of Norwegian artist Bjarn Melgaard's "Ideal Pole" exhibit at the Ramiken Crucible gallery on Grand Street. 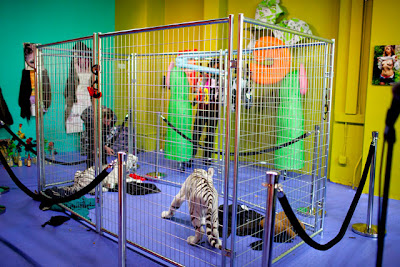 No word on why the exhibit is closed. Or if the tigers will be back. They were scheduled to be there until June 3. Gothamist wrote, "We've reached out to the Humane Society of the U.S. to find out what the rules are about this sort of thing, because that cage looks too small to us."

Gothamist received a statement from the Human Society of the United States. Part of the statement:

The baby tigers on display at the Ramiken Crucible gallery were prematurely removed from their mothers, transported to New York from a game farm in Ohio that has been cited for failing to meet minimum standards of the federal Animal Welfare Act, and are confined to a tiny barren cage inside an art gallery.

Email ThisBlogThis!Share to TwitterShare to FacebookShare to Pinterest
Labels: Lower East Side, tigers

The cage is perfectly fine. They are happy and playing. 5 month old sisters. The humane society? Really? STFU

Looks too small to me too, besides just the idea of caging wild animals so they can be unwitting pieces in some "art exhibit" feels frivolous and inhumane. I am by no means a bleeding heart animal lover but it is precisely tone-deaf narcissistic bullshit like this that makes me hate fucking "art".

What "statement" does this piece make?
Large Asian felines where they're not supposed to be?
I can see the same thing in any zoo. You have juxtaposed some juvenile tigers....and Soho!
Hardly mind-blowing stuff for those who remember the guy busted for keeping a fully grown tiger in his Harlem apartment 7 years ago. Your "art" is
pedestrian and hackneyed. This is NYC not Las Vegas. Step up.

I'd say this represents the NYC art world perfectly: putting babies, stolen from their mothers, into cages.

omg THOSE POOR LITTLE BABIES, they must be dying for their mother! someone arrest these monsters