How is your Houston Street Corridor Reconstruction going? 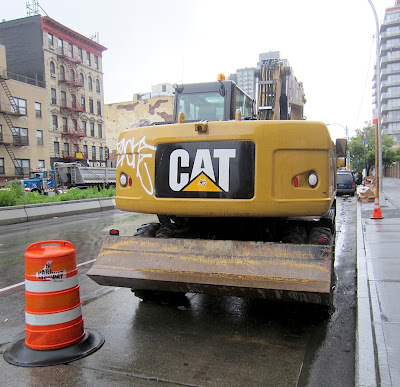 Speaking of East Houston... On Monday, we posted information from DNAinfo's report that the $60 million Houston Street Corridor Reconstruction project would not be completed until the summer of 2014. (One year later than planned.)

The DNA article focused on business owners (the Subway in the Red Square shops is reportedly hurting) and traffic ... We asked readers who live along here for any construction horror stories.

Here are a few of the responses:

RyanAvenueA said...
The intersection of A and Houston, where 1st st begins, is still a pedestrian nightmare. Drivers aren't sure where to go which slows down the intersection so that someone eventually ends up flooring it through a red light. A couple months ago I saw a big truck take out one of the construction barriers. As for Subway's decline, I have to imagine the fact that there's now 40 other Subways in walking distance means some of your customers probably live closer to the competing stores.

Anonymous said...
challenging to walk around. inevitable that some poor pedestrian will get hit by a passing car. i don't wish that to happen but i just have a sixth sense about disasters...

Anonymous said...
Cycling across Houston at A is a weird dash-now-and-hope-for-the-best exercise...mostly because cars don't know where to go most of the time, so bikers are left to dodge.

next year's survivor tv show should be filmed on the concrete islands of houston street...

if i were a personal injury lawyer, i'd just stand at the corner and hand out my business card, a la paul newman in the verdict. better than handing out cards at a funeral. plus it makes you look really proactive.

YOU CAN'T MAKE A LEFT ON AVENUE D ANYMORE