Yesterday morning, we had the post about Vandaag being closed of late on Second Avenue at East Sixth Street... later in the day, Eater got word that the nearly two-year-old Dutch eatery had closed for good.

A goodbye sign went up later in the afternoon... via EV Grieve regular peter radley... 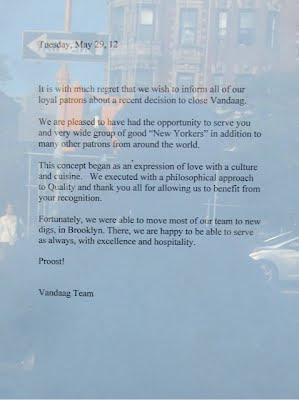 Robert Sietsema at Fork in the Road noted the signage and closure yesterday afternoon. You can read his thoughts on the matter here.

Meanwhile, in an email, an EVG regular wondered if Vandaag ever actually had a "plumbing emergency" like the handwritten sign on its front window suggested. "Did they decide to close before or after the 'plumbing emergency?'"
Posted by Grieve at 6:29 AM

Too bad. The place was expensive and somewhat pretentious, but they sure knew how to make a serious breakfast. Plus, it was nice that it wasn't another Thai take-out place, or ramen shop.

I agree with abrod - "expensive and somewhat pretentious" although I would leave out somewhat. Another restaurant churned out from this tough luck corner.

Please, not a sports bar.

I am surprised they sunk so much money renovating this space from its previous Bounce Douche days, and then simply close by putting up a lousy "plumbing emergency" sign written on a brown-paper bag.

Oh, great. Now where am I going to find a chuck of mud garnished with a dollop of swamp foam for $40?

Was a beautiful space. Never tried it, though, since I am vegetarian and everything there seemed to be made from dead animals.

Now we may dread/fear/hope regarding what will appear on this corner next.

I remember that inane sports bar. A couple drunks stumbled out in the middle of the afternoon and tried to pick a fight with me as I was walking by because they didn't like how I looked. Charming.

People eat at restaurants, not concepts.

The bar was great and unique. Kopstootje (little headbutt) and Turf War were solid stiff ones that are now not in the hood. I'll miss having them as an option. Agreed on the food, it was generally overpriced and pretentious, however the bitterballen were worth the $10.