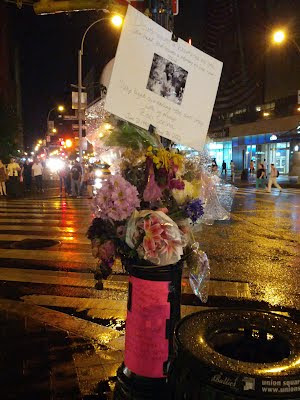 EVG reader John sends along this photo of a memorial at Union Square.

Early last Thursday morning, Roxana Sorina Buta was returning to her East Harlem home from her job as a waitress at Bar 6 on Sixth Avenue and 13th Street. She was reportedly crossing Broadway at East 14th Street when a dump truck struck and killed her. She was 21.

The driver reportedly never stopped ... and the woman's mother is asking for the driver to turn himself in. "He hit my daughter and he just kept on driving. Who does something like that? He should give himself up," the mother, Cristina Oprea, told the Post in an article published this morning.

Gothamist has more about the Hunter College student and aspiring actress here.

The above sign reads, "Sleep tight our darling sister, and stay with us always."
Posted by Grieve at 10:47 PM

This tragedy fills me with rage. These trash trucks often speed and make turns with oblivion. How is it possible that the driver still hasn't been found??? Isn't Union Sq one of the most closely watched places in the entire city? Commercial cameras, NYPD almost living there over the past few weeks, but the lowlife driver managed to get away? NYPD, please shift your priorities from peacefully protesting folks to drivers who actually kill many innocent people each year.

This is so terrible. She was so young.

Crossing 14th Street at many points (1st, 3rd, Broadway) is just deadly for pedestrians. These drivers are nuts. Anyone who hits and runs is going straight to hell.

RIP Roxana. My heart goes out to your family.

I knew her as a young and vibrant teenager from Ridgewood that everyone gravitated towards. She grew up into such a successful and beautiful young lady living her dream.

R.I.P. Roxy, I feel heartbroken that it ended this way for you. I always thought you and Keith would get married and have beautiful babies.