Catching up on a few items that I meant to post last week. (Or maybe the week before.) Such as!

Over on First Avenue between First Street and Second Street ... the MTA is, as the sign shows, building sidewalk extensions (bus bulbs!) for the M15 and the Select Bus Service... 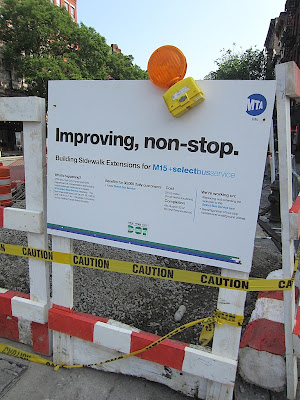 ...the sign says something about completion during the fourth quarter of this year... 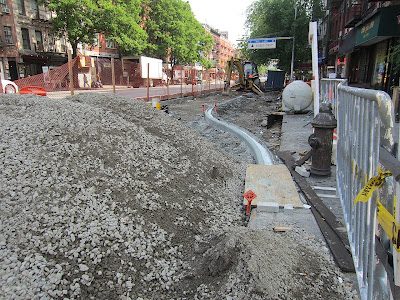 As Streetsblog puts it: "Bus bulbs — sidewalk extensions into the street at bus stops — keep bus shelters and ticket machines out of the way of pedestrian traffic. And by allowing buses to load passengers without having to pull to the curb and back into traffic, they also make for faster rides."

... Meanwhile, no word on how this is slowing down the limo departure times outside Lucky Cheng's... 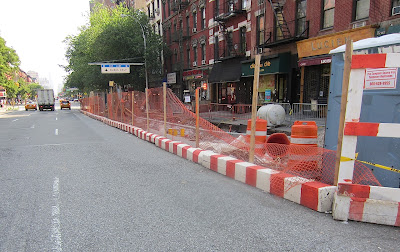 This is very positive. Which stops in the East Village will be getting the bulbs installed?

Anything move to widen the sidewalks is good by me.

I am usually very much in favor of bus bulbs and sidewalk extensions, but how is this going to help here? The only traffic the buses should have to be pulling back into on 1st Avenue is the bus traffic in the bus lane. If the buses are no longer pulling into the curbside lane, that will mean if a bus comes from behind in the bus lane, it will get stuck behind the stopped bus, unless it wants to veer around it in the general traffic lanes.