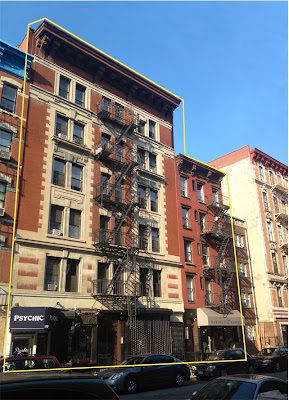 The subject properties are two well-managed adjacent mixed-use buildings located on the North side of East 2nd Street, between Avenues A & B. 170-172 East 2nd Street has 3 retail stores and 34 residential units; 27 Free market, 6 Rent Stabilized and 1 Rent Controlled. 174 East 2nd Street has 1 retail store and 9 residential units; 8 Free Market and 1 Rent Stabilized. The buildings share a boiler that burns #2 oil from a 4,000 gallon tank. The electrical systems/wiring were upgraded in 2008 and tenants pay their own electricity.

Anyway, you may have seen the plaque out front of No. 170 showing that Allen Ginsberg lived in apartment 16 from August 1958-March 1961 ... this was one of the many places he lived in the East Village until his death in 1997

Looked at an apartment in this building last year and was told by multiple tenants that the building had bed bugs. Yikes....

I can understand a student maybe never reading any Ginsberg, but never heard of him? Really?

Did you hear that? That was the sound of my head exploding....

these kids of the New East Village are fucking pathetic. what ignorance, and such pride about it.

Jesus. How can you go through life without poetry? What has become of us? NYU seems like the equivalent of an ATM experience. Deposit the cash and we'll send you a certificate. Does it mean anything anymore to go to college? Don't these kids have any respect for the artists and writers who once populated our neighborhood? Wait, don't answer that: I'm depressed enough.

I guess Siri or their apps didn't tell them about Allen Ginsberg.

These buildings must have been entirely rent controlled/stabilized at one time. How did the landlord drop all those apartments off the rolls?

Ginsberg was no Hemingway so give us a break.
They've been driving real tenants out for over 2 decades. Now what's been percolating is become manifest. As for the NYU Yuppy factory? Just got a whole lot worse- they've passed a mega-million acre expansion and soon all the good stuff will be gone to be replaced by Starbux and acrylic. That is the price we pay for a citizenry who refuses to get involved with their civic duties. Not one of these Council members will be voted out (like the bailouts) either in retaliation. It really is up to the people, and if they wont fight the good fight, they should stop whining over the predictable consequences.

I used to live here and, yes, Anon #1, there was (is?)a bed bug issue. My apartment was never infested, but I had a neighbor who told me all about his ongoing battles...I was constantly worried that my apartment would be next. The building is old and bed bugs travel throughout structures like roaches, not just by hitchhiking on people/clothing. Although I really liked my apartment, it was kind of a relief to move. I hope the new owners spend the time and money to treat the entire building.

I lived through seven fires in this building; 1965 through 1977. Apartment 26, what a nightmare for a kid to grow up in back then. Sixty-five dollars a month rent-controlled until the day we left.