Have you seen 'Eleanor Rigby'? 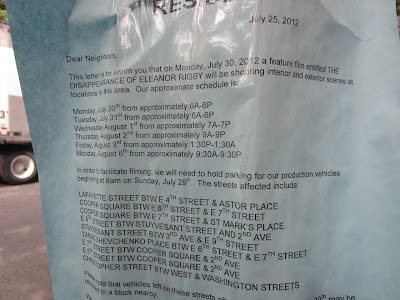 As you may have noticed, crews for "The Disappearance of Eleanor Rigby" have (and will be!) filming in part of the neighborhood all week, not to mention next Monday... The sign above lists where all the trucks and stuff will be...

As for the film, per IndieWire:

Slowly shaping up to be one of the more unique productions this year, “The Disappearance of Eleanor Rigby” has gradually acquired a talented cast fit for its two-film premise — that of a troubled marriage told, in each installment, from the husband and the wife's perspective. A few weeks back Jessica Chastain and James McAvoy were locked in as the couple, and now a slew of new names have come up just as the film heads into shooting. 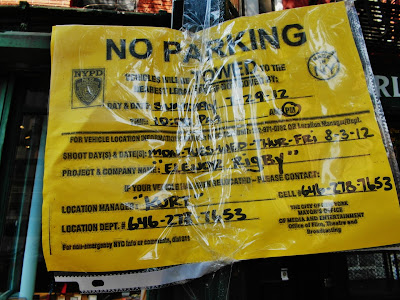 All the lonely people, where do they all come from?

@anon 3:38: Why should you be compensated for something you do not own? The streets belong to the city, not you, and the city benefits from the millions in revenues the film business brings each year. Get a grip.

I don't think that the city gets much; a permit costs $300 and is a permit is required for filming if equipment or vehicles, as defined in the rule, are used or if the person filming asserts exclusive use of City property.


Plus they get free vehicle break-in and towing services from the NYPD which maintains a special "Movie Detail" category for this.

There is no such thing as a "break-in" service and the production companies pay for the tow trucks. In return they generated 60 Billion Dollars in NYC over the last ten years:

@Anonymous 9:41 PM: OK, so if they don't break in how do they tow a FWD vehicle that has its emergency brake set without either releasing the brake or shearing off the parking pawl of the automatic transmission? Serious question; I'd really like to know the answer - can you tell me?

While $6 billion per year sounds huge, but it's less than one percent of the city's total annual economy. Not that there's anything wrong with that.

One doesn't have to call for running the on-location film industry out of the city to not want their lives in upheaval every time some film crew claims the block they live on.

No, but I have seen Polythene Pam.

While I love to see things filmed in NYC, they need to plan these shoots a little better- sometimes there are multiple shoots within a week on the same couple of blocks or they shoot on days and times that are traditionally busy and this ties up several blocks of parking and causes more traffic. It can be frustrating to live or work on a constant movie set- they could try to spread them out a bit time-wise or location-wise