Why the New York Marble Cemetery is throwing fancy parties 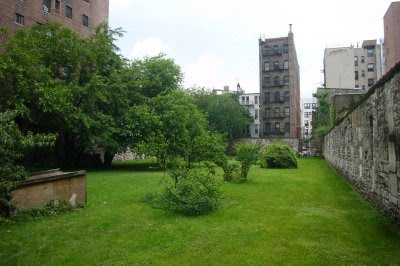 There's a feature in The New York Times today on the New York Marble Cemetery ... and why the historic cemetery on Second Avenue between Second Street and Third Street is hosting weddings, Vogue fashion shoots and Stella McCartney fashion events...

The cemetery’s trustees, descendants of some of the people interred in the vaults — the last burial was in 1937 — have allowed events to be held on the grounds to help pay for badly needed repairs and restorations.

The aim, said Caroline S. DuBois, one of the trustees, was “how we could make the cemetery pay for itself.”

Officials at the cemetery, which was established in 1830, did turn down a promotional party for a tequila company.

However, regardless of how upscale some of the events may be...

The neighborhood’s old grittiness has not disappeared entirely. [Gardener Gresham] Lang said he sometimes found hypodermic needles on the grass. A mulberry tree near the ruined wall is now “the underwear tree” because residents of a homeless shelter nearby “throw underwear, condoms, among other things” into the cemetery.

Previously.
Posted by Grieve at 12:17 PM

Who gets married in a graveyard? Other than Tim Burton...

I like the idea of a graveyard wedding. Eerily romantic. I'm glad they turned down the tequila party, though.

Literally, the city's new elite are dancing on the graves of those who came before. The metaphor for the new rich showing absolutely no regard for the history of the city they found is startlingly apt.

As the only couple ever to be married at the NYC Marble Cemetery (the other one on 2nd Street), my wife and I can attest it's an incredible, beautiful thing to be married in a cemetery. Come by for the next opening to the public this Saturday and you'll understand.

The costs of upkeep, especially for the stone walls, are staggering. If tastefully done, I see no reason not to rent them out for photo shoots, films, weddings and parties. They aren't making much $ on dead people anymore (insert dying business jokes).