When we almost lost St. Mark's Church in-the-Bowery to a fire 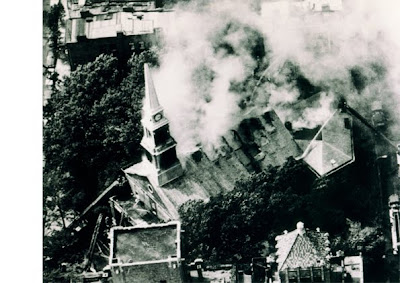 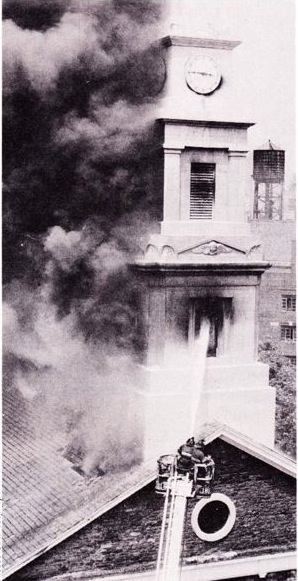 On July 27, 1978, a fire nearly destroyed the St. Mark's Church in-the-Bowery, long a focal point of the community. At the time of the blaze, workers were nearly done with a $500,000 restoration of the historic church on Second Avenue and East 10th Street.

According to an account by Tom Sotor in the East Side Express:

The fire began when a workman's welding instrument ignited a section of the timber cornice, and from there the blaze spread rapidly. "Smoke was pouring out of the hell tower when we arrived," recalls one of the first firefighters on the scene. "I said to myself, 'This ceiling's going to go.' And sure as hell, there was a partial collapse." The rear section of the 50-foot high peaked roof collapsed a half-hour after the fire began.

The 75 firefighters involved with the three-alarm blaze Were faced with many other problems as well. A six-foot iron fence that surrounded the church and a graveyard on one side prevented the companies from utilizing anything but portable equipment. Consequently, a tower ladder had to be employed to spray the front and rear, while the sides of the church remained practically unassailable.

There was also danger of the 150-foot steeple collapsing. "We kept an eye on the steeple'supports," explains John J. Moffatt, the commander in charge of the fire. "If it fell, we would have had a lot of injuries."

There weren't any reported injuries... though the fire caused major damage to the church, including the loss of the roof and nine of the 23 stained-glass windows. 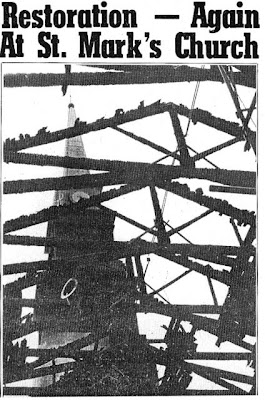 [Via East Side Express]

The Citizens to Save St Mark's was founded to raise funds for its reconstruction ... supervised by architect Harold Edelman. The restoration was completed in 1986, with new stained-glass windows designed by Edelman, who personally supervised the entire project, according to his obit in the Times from 1999.

And a little snippet of the history via the Church website:

Those photos are really hard to look at. We need more Harold Edelmans.

Wow, I had no idea this happened.

Wow. It's a miracle it's still standing considering the circumstances.

Are they going to put the historical timeline plaques back on the iron gate facing 2nd Avenue? They were pretty weather-worn but still very informative.

When the renovations were finished the clocks worked; about 18 months later a lightning strike to the tip of the steeple froze the hands at approximately 5:50, and they have never run since.

"The HELL tower"??? Someone needs a proofreader...

Great piece of History EV. Thanks for the post.