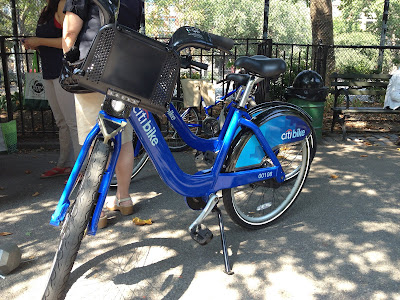 The city’s stalled bike-sharing program is asking for financial help even before it begins, The Post has learned.

Alta, the company that was supposed to have put 10,000 bicycles on the street starting today, has asked the lead sponsor to accelerate payments of $3.5 million in case the program is delayed until next spring and runs out of cash, sources said.

This whole thing is going to be a f*cking nightmare in so many different ways. I have no doubt that within two years the whole program will be shut down after millions have been poured into it and we will be left with nothing but a bunch of ugly bike racks littering the city.

I believe they are the ones stopping people on Second Ave and polling them about their feelings towards bikes in the city. They were all around the old 2nd Avenue Deli spot yesterday and the day before.

I think bike sharing is a great idea. Other cities in the country have it, and it's such a wonderful way to ride around and see a city or neighborhood. I hope it comes here soon!

Anon #1, I'm not sure why other cities (Boston and freaking DC) can have successful bike programs and NYC can't.

And if the program fails, why would the "ugly bike racks" be left behind?

I think there are good criticisms of the program (even though I haven't heard of any yet), but most wreak of stereotypical... (dare I say it)... elitism.

this will never happen unless bloomberg foots the bill personally. bad idea from the get go. NYC streets are not bike conducive, never have been, never will be.

Boston and DC have successful biking programs because they are not NYC.

This whole thing was a nightmare from the start. NYC streets cannot safely acommodate this many bikes.

No matter what you think of the program itself, this is another Bloomberg disaster (the buck stops here-NO) that the fawning national (and most of the local media as well) will ignore. Funny, isn’t this, system and software implementation, supposed to be his expertise? With this and CityTime city payroll system scandal, he truly sucks. Nothing is ever his fault. I am so tired from hearing from “serious people” pundits how he is such a great mayor.

It's working quite well in Mexico City, which has a much worse infrastructure for bikes than NYC. I'm sure problems will arise, but I get the sense that some people are imagining a flood of bikes everywhere...even if this thing takes off, it's not like it will be an avalanche of blue every time you walk outside. NYC is big, and perhaps one in 50 people will take advantage of the bikes...like, ever.

Succeed or fail, either way, someone's getting paid big time.

What bothers me the most is that why should we pay a fee to become a moving advertisement for citibank?! Granted they are the sponsor for the program (aka million $ tax break seeker) but they should also pay an additional ongoing fee for being the exclusive advertiser on these bikes! Like I said, somebody is getting paid somewhere ... and it ain't us.

Completely agree. Don't even get me started ... the worst part was how the story/scandal got buried in the media. It seems as though if you have an upper-level position in this administration, you can literally take the money and no one will know.

As mentioned above, Mexico City has a bike rental program. And I'm not sure that Boston's streets are any better for riding than NYC's.

DC has better streets for riding, but you have to think more vandalism/crime connected with their program. (Because DC is a shiathole.)

Fipper, are you suggesting that people/corporations should not get tax credits for donations? Or that companies should be taxed on their expenditures?

they don't give helmets with these bikes. they are ASKING for problems.

@pumpkin patch: no, that is not what I'm saying at all. if that's the case, nobody would be donating any money. What I am saying is that when a publicly traded multi billion dollar corporation makes a decision to sponsor or fund a community based program, it is most likely not out of the kindness of their hearts, rather, it is. because of a team of suits and number crunchers who made sure such donation will benefit their statements and balance sheets. Because the bottom line for these corperations are the stockholders and share price. If there's a loss or earnings did not meet expectations at year end... I think you can figure. out the rest. In this case, even though citi is donating $40+ million over 5 yrs, i wouldn't be surprised. if those sneaky bastards found a way to write off that whole amount this year.

So, just to be clear, my statement was not a matter of taxation, but a matter of greed under the guise of good intentions.

@Flipper OK, I understand. I admit, I for one am exciting for the bike program (even if they have CITI pasted all over the bikes themselves). I do not know enough about corporate tax law, but I wonder if donations have a more beneficial tax treatment than expenditures on advertising. If so, that would raise an issue that I agree deserves criticism.

someone please stop this godawful thing. save us from the merciless attack of citi marketing on our senses, our lives, our beautiful city.
STOP THE MADNESS!!!