This past weekend, The New York Times published a piece about residents of Stuy Town listing their apartments as hotel rooms on the website AirBnB.com.

(For most residential buildings, a 2010 law prohibits rentals of fewer than 30 days. Although those who microsublet for fewer than 30 consecutive days and remain present in the unit along with their guests — and those who don't accept money from renters while away on vacation — are exempt, according to city officials, as the Post recently pointed out.) 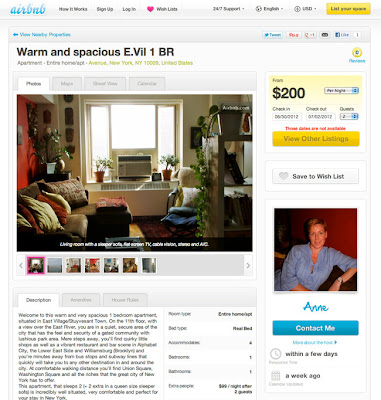 Short-term rentals of this nature have been a problem for the housing complex for about two years and residents are concerned about things like bed bug infestations – which are on the rise — and security risks. Unhappy with CWCaptial and Rose Associates' response to the ongoing problem, residents have taken their frustration to the Tenants Association's Facebook page, posting links and the names and addresses of the hosts. From the article:

John Marsh, vice president of the tenants’ association, blamed the complexes’ leasing agent, Rose Associates, for not policing the “explosion of short-term rentals.” The tenants, in partnership with Brookfield Asset Management, are trying to buy the properties.

“It’s odd that people who are not private investigators can take these people’s information and find them on the Internet,” Mr. Marsh said. “Given that capability, you would imagine that someone like Adam Rose, who is quite resourceful, can do the same,” he added, referring to the co-president of Rose Associates.

In response, Joe DePlasco, a spokesman for Rose Associates and CW Capital, which took control of the two complexes in 2010 after Tishman Speyer defaulted on the property, says they have sent sent cease-and-desist letters to 50 tenants since the middle of last year. 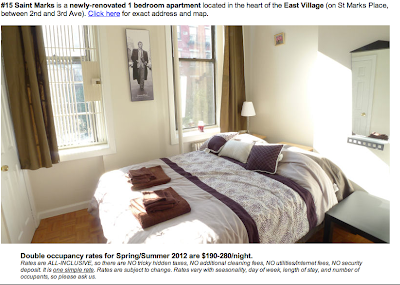 "I’m curious about the development of two of the apartments in the building being used as hotel rooms aimed at tourists.

I stumbled upon this website www.manhattanbnb.com with the cringe-worthy motto “Live Like We Live!” which lists one of the apartments in 31 Saint Marks Place as “#15 St Marks Place”

I don’t understand how one couple with the cutesy name, John n’ Lucy, have all these apartments in the neighborhood to let out to tourists. John n’ Lucy certainly have never lived in my building.

Now that the media outlets such as the Times are on the story, more and more residents are feeling empowered to do something about the short-term rentals in their buildings. We'll be posting more of these moving forward...

Previously on EV Grieve:
The house rules of a short-term rental on St. Mark's Place
Posted by Grieve at 6:50 AM

it is a real problem, I know the Crowman buildings on ave B north of 3 are also being used as short term rentals . A person living at the newly sold 523 e 12th street said the new landlord had renovated and furnished two apartments there. I guess there is more money in illegal hotels than long term rentals!

Regarding www.manhattanbnb.com -
If you click on the google map thumbnail at the bottom of each apartment's webpage, it will take you to google maps and you can see the exact address in the google map search bar. #15 Saint Marks is 31 Saint Marks Place. The other locations are:

It's happening in my building, too: 120-122 East 4th Street (bet. First & Second Aves.). Some of the Renters even go as far as including "Free bike rentals included with your stay!" If you suspect someone is doing this in your building, contact John Bigolski: jbigolski@cityhall.nyc.gov
He is very interested in tracking down these illegal housing situations.