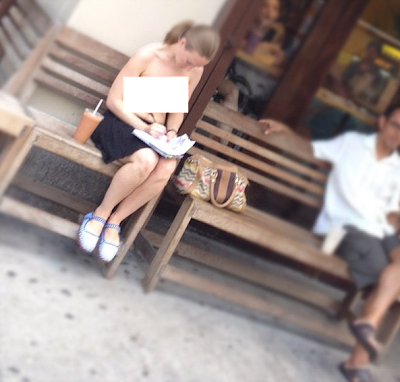 Via Gothamist yesterday, we've learned more about East Village topless advocate Moira Johnston ... who we first wrote about back on May 18... as you probably know, she has been raising awareness that it's OK and perfectly legal for women to be topless in the city....

The Daily Beast featured Johnston in a post this past weekend... (Probably NSFW)

According to the article, her advocacy campaign started in January ... after a yoga studio banished her for taking off her top in class. "Some of the other yogis complained to the owners about her bare breasts, but Johnston thought it unfair that men be allowed to go topless in Downward Dog while women are forced to keep their mammaries in their Lululemon tanks."

Since then, she has filed legal complaints against 13 yoga studios.

Meanwhile, you've likely seen her walk around the neighborhood ... she told The Daily Beast that she has received mostly positive comments from passersby ... except for "the man who told her he’d just gotten out of prison and was going to hurt her."

"I considered carrying mace [after that encounter], but that's absolutely not a common occurrence," Johnston says, adding that she's never been groped or assaulted. "Most people are fairly respectful, at least in terms of my physical space."

Previously on EV Grieve:
[Updated] There is a woman who has been walking around the East Village topless

Shocking revelations: People like looking at photos of topless women on the Internet
Posted by Grieve at 6:50 AM

I'm pretty sure that it's inaccurate to say that women are free to bare their breasts in NYC. On the books, it is illegal. The original NYS decision was centered around a group in a Rochester State Park and from my understanding, the City and the NYPD simply choose not to forcefully enforce existing statutes. I think this woman is both misinformed and seriously narcissistic.

And while her campaign has been in full force for the better part of this year, I've yet to see anyone else adopt the fashion. Maybe she should go hang with the ghost of Charlotte Moorman.

I find this annoying, not because she's doing it, but because she says she's "raising awareness". Women breastfeed in public all of the time. They don't get media attention for it, nor do they seek it. To try to pretend that this is some sort of women's rights issue is really stretching it. If you wanna go topless, go ahead. But don't pretend it's under the guise of some riveting social cause. Women with breastfeeding babies have been doing this for ages.

Thank you for featuring the courageous activism of Moira Johnston.
GoTopless Day is Aug 26 because everywhere in the US and the world, women should be allowed to experience this NYC woman's topless freedom in their town.
See our GoTopless map for GoTopless events around the world that day http://gotopless.org/gotopless-day

This chick needs a job.

It's just so hard to really care about this (and to that extent, congratulations, Moira, you've won!) other than the somewhat galling suspicion that, behind the supposed self-righteousness of the gesture and the perpetual scowl, this just seems like (excuse me here) naked self promotion and little more.

Which is, of course, a much bigger threat to life in NYC than topless women have ever been.

At any rate, these things come and they go.

People still upset by women's breasts - hey let's go burn some churches and send SWAT team after the raw milk sellers. Hey is Romney running for president of ISrael or USA? I betcha neither candidate visits the e.vil.

Dang it! Everyone else gets to enjoy this woman. When am I gonna get to meet her? I'm out, I'm about all the time, I just can't seem to run into her.

this broad is doing this for some dopey book she's probably writing. Frankly, the lack of respect for people who have children is staggering in this City. If folks want to live in a society where clothing is optional, I suggest moving to New Guinea. or San Francisco. This woman is plain rude and I hope someone has her arrested. I see no differenc between her and the guy who was washing his balls in the water fountain and got arrested.

She's a bore. We did this shit in the 60s and didnt media coverage.

@nygrump: Obama visited the E.V. last November. His motorcade visited at 60 m.p.h. The wrong way on E.12 street enroute to fundraiser in the West Village

To which movie studio will she sell the screenplay?

Captian Hindsight - oh yeah how could I forget! My friend was coming to visit me that day and wouldn't let him cross the street...

At Integral Yoga Institute men and women are asked to wear loose comfortable modest clothing as it is an ashram setting. I think it is Moira who was outside on the bench topless a few months ago, but hope she is not suing IYI, as males do Not get special passes there to show skin above the waist! Very curious about her suing all these studios for discrimination...why not just go to Naked classes? She is on some kind of crusade but why single out these settings?

She's clearly mentally ill, yet using "activism" as an excuse for bizarre and inappropriate behavior.

this is a person with profound psychological problems. She feels baring her breasts in public gives her the validation she feels she is not worthy of. you learn all about this shit in Psych 101 at NYU.

this is a person with profound psychological problems. She feels baring her breasts in public gives her the validation she feels she is not worthy of.

Spoken like someone whos entire knowledge of psychology comes from Psych 101 at NYU.

File this under "Shit white girls do..."

@anon 440
except washing your balls in the water fountain is illegal, while what she is doing is not...

You guys will all be proven right when she ends up w a book or a movie, or in the loony bin. Till then Im going to give her the benefit of the doubt.