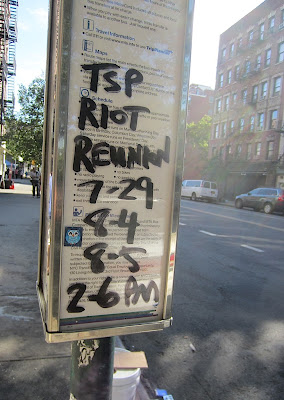 THE TOMPKINS SQUARE REBELLION IS ON!!

24th ANNUAL TSP RIOT REUNION!! Commemorate the anniversary of the mini police riot of July 30, 1988, followed a week later by the infamous 6 hour riot inside and outside of Tompkins Square Park on August 6, 1988, in which hundreds of "New York's Finest" from all over the city descended on our neighborhood, indiscriminately clubbing anyone in their sights in furtherance of a non-existent midnight park curfew.

These shows celebrate the vitality of the counter cultural scene that has survived on the Lower East Side, despite the rampant gentrification, soaring rents and lost venues that have contributed to the cultural genocide sweeping New York City.

What's the point in celebrating a police riot that achieved no positive results for people in the community?

The August 6, 1988 Tompkins Square Police Riot brought members of this community together like nothing had before, it enabled us to keep the forces of gentrification at bay in this neighborhood for at least the following three years, and it led to the creation of the CCRB (Civilian Complaint Review Board) that keeps track of incidents of police abuses (admittedly, though lacking real teeth, it is better than nothing!)

Each year we COMMEMORATE the events of that infamous night, as well as the causes and effects therein. We do not "celebrate" the violence that we experienced at the hands of our "Boys in Blue" -- we are determined that such a thing NEVER be allowed to recur!!

I was around then, as were you. The riot did *not* bring people together. It forced out the homeless encampment, dispersing people to the surrounding area where they eventually disappeared from people's thoughts. The park was closed and rebuilt. During that time, local residents (who, in the main, opposed the homeless encampment) were appeased and didn't even oppose the curfew.

By the way, the gentrification of the lower east side started in the 1960s and has proceed in fits and starts ever since. It's a global phenomenon, not a local one. (This is not to say I support it.)

The Haymarket riot is remembered because it was part of a larger struggle and it galvanized people to fight further. The TSP riot galvanized no one. I guarantee you most people who attend these commemorations will not have been born before 1988, and will live outside NYC.

It's just super annoying that they scribbled this all over the neighborhood in permanent paint pen. No respect.

Can anyone confirm bands/dates this weekend August 4/5? Are there bands BOTH days or just one of them? Thanx - just wanna be there to support.