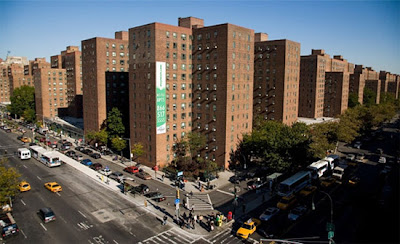 Here's a story that merits widespread coverage... The Stuyvesant Town Tenants Association's new survey finds fire code violations in all but four of the complex's 110 buildings. Tenants Association volunteers recently inspected the buildings to check on things like building maintenance and cleanliness and what they found were a whole lot of fire code violations. Cut to the report:

"The survey, conducted in late spring by Tenants Association volunteers, discovered instances in all but four buildings in which fire doors do not close properly, in violation of Fire Code requirements that fire doors be self-closing. The TA has brought the survey results to the attention of Fire Commissioner Salvatore J. Cassano and Sean Sullivan, General Manager of ST/PCV.

In addition to the findings on the doors, the TA’s volunteers noted buildings that were missing floor indicator signage in hallways, on stair doors, and in stairwells; standpipes that were locked and chained; piping passing through holes larger than the pipes themselves creating a path for fire and smoke to travel; and what are unsafe and non-code-compliant window safety panes, such as plastic, in the fire doors themselves."

A FDNY Fire Inspector described the failure of self-closing doors as “extremely dangerous, because it could fail to stop the spread of fire, and especially smoke, to other areas of the structure."

To make matters worse, they found evidence of alcohol, tobacco, and drug use in the stairwells as well as indications that people have been using stair landings to relieve themselves and their dogs.

Anyway, at least they have a snappy new cafe!

Read the full report from the Tenants Association here:
Over 580 Fire Doors Are Found Not To Close In Stuyvesant Town-Peter Cooper Village

And cockroaches - the place is awash in cockroaches. My mom lived there for a while and I always used to see them crawling around in the public areas - walls, ceiling, floors. I called her apartment The Kingdom of the Roaches because it was so infested, even with regular exterminator visits. It's why she finally moved.

And rats. Garbage is out of control. There are too many people,transients don't care since they're just passing through and it's not their home. Maintenance people can't keep up with it. It's a disgrace. And it's dangerous!

And flip-flop wearing iZombies. Even worse than the roaches and rats.

has anyone read their blog? lol we're reffered to as "outsiders"

They invest more money into landscaping and events than they do building maintenance. I have a friend who lives there and she says the recycling areas overflow with garbage and the washing machines are always breaking. She's moving out when her lease is up.

It's no wonder they want the tenants to attend events in the Oval, the whole place is going to be a towering inferno!

It's too bad that we would even think of using a term like 'outsiders' but the fact off the matter is Stuy Town's private security team does a lousy job of policing the property.

We have people from the east village coming in and using the place as a dog toilet and not picking up.

We have teens coming in to use the playgrounds who start fights with each other.

We have the frat crowd come in at night and drink beer and scream in the parks.

We had a psycho with an ice pick attacking women and their children.

Katie-- The landscaping is indeed ridiculous and out of control.

Correct me if I'm wrong but aren't these building identical to the Riverton Houses projects in Harlem?

@Anony 3:08-And Parkchester in da Bronx as well. “The housing development has the same origins as Stuyvesant Town, Peter Cooper Village and Riverton Houses in Manhattan, all of which were originally developed and owned by the Metropolitan Life Insurance Company.” All three have a recent story of woe. That's woe, not woo!

I am a Stuytown resident. People ridiculing and piling on, you do it at your own peril. (Denial is not just a river in Egypt.) I was once like you--I moved here from the EV last year. I stuck it out in an crumbly EV tenement apartment for almost a decade godamit. Stuytown is a huge place and you can't paint it all with the same broad brush. There's 11000 apt units here. There are good areas here and mine is one of them--20th St. Loop. I don't have bedbugs, I don't have roaches. There are some college losers around but they are outnumbered. OK the brick building might resemble housing projects but this is easily the most tranquil and humanizing habitat I have yet to see in this lousy city. In terms of bedbugs roaches, trash and college losers Stuy town is still much better than the EV. I should be the one ridiculing, you are the one who stinks.