A woody start for The Third Man on Avenue C

The plywood came down around the former Lava Gina space the other day on Avenue C between East Seventh Street and East Eighth Street... Dave on 7th passed along this photo from yesterday... 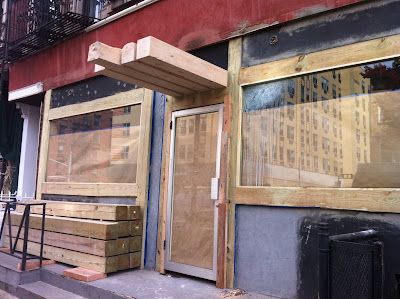 Coming soon: A new cocktail lounge from the Edi & the Wolf people down the next block... The lounge will be called The Third Man, named after the 1949 film-noir classic starring Orson Welles and Joseph Cotton.

Per Eater: "The Third Man's food program will focus on Austrian-style small plates ... it'll be a fairly small, 15 seat affair. The décor is inspired by Vienna's Loos Bar, complete with 'floating' steel bar hanging from the ceiling."
Posted by Grieve at 6:17 AM

Email ThisBlogThis!Share to TwitterShare to FacebookShare to Pinterest
Labels: Avenue C, Edi and the Wolf, The Third Man

I stopped in the American Bar (aka the "Loos Bar") in Vienna in September and they don't have a "floating steel bar", so not sure what that's all about. I love Austrian food so maybe this will be promising...