Sad News All: Sunday will be our last day open. :( Hope to see all of you until then!

With the business battling high rent all year, eight days without income during the post-hurricane blackout and the winter a bad time for sales, Stogo's owners made the call to close.

"We were talking about closing, but [Hurricane Sandy] put a nail in the coffin," said the source, who works at the store on East 10th Street between Second and Third Avenue.

"We were going to try and fundraise to move, but then Sandy happened and I didn't want to ask people to help move our shop when people were homeless and had lost everything," the source added.

Stogo opened in December 2008 at the site of the beloved A. Fontana Shoe Repair, forced out after 45 years due to a big rent hike. 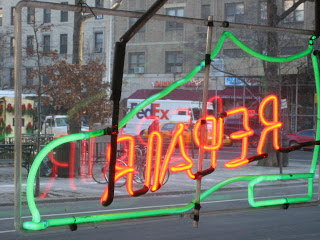 Stogo's co-owner is Rob Sedgwick, the brother of actress Kyra.
Posted by Grieve at 3:44 PM

Email ThisBlogThis!Share to TwitterShare to FacebookShare to Pinterest
Labels: Stogo

I've never tried Stogo, but at least they are classy enough not to ask people for money like S'Mac..and I'm sure they make a lot less money than that place anyway

I am veganish and really really really wanted to love this place, but the taste just wasn't great, it had that weird soy after taste, and often they were out of half the flavors. Lula's rocks.

While I don't want to engage in schadenfreude, they probably know now what it must have felt like to Mr. Fontana. His closing was quite upsetting to some of us locals. Anybody know what happened to him? Did he find work elsewhere? --Charles Hutchinson

Do any of you eat this stuff ? If I'm going to indulge in some ice cream, it had better have CREAM in it.

Still holding a grudge about the loss of my beloved cobbler, so I never set foot in the place.

Were they forced to close because they were unable to find any other incredibly rude people to work there?

Stogo was always a Nogo.

No tears for Stogo from me; I used to go to Fontana for shoe repair, never set foot in the place again once it closed. Another useless storefront catering to - well, not enough people, apparently.

I tried it and can't say I was a fan. I also never understood how an ice cream shop could survive year round.

Um, people, you know that a new tenant isn't responsible for the demise of an old tenant, right?

This is exactly what we knew would happen when Fontana was forced to close by a landlord wanting much higher rent. And it's happening all over the city. Stable, long-time, and beloved businesses are pushed out, and in come trend-based businesses that cannot be sustained, certainly not with those high rents. And so we're left with a revolving neighborhood streetscape, with nothing we can depend on and no sense of continuity.

It leaves all of us without a stable sense of place.

As for Mr. Fontana, I heard he retired to Staten Island.

Is that stupid water store still open in the EV?

Price is no object said...

@Adam K: actually the new tenants are providing the landlords with the exhorbitantly high "market rent" needed to push out the old tenants.

If there were no suckers taking the bait (and I must say that this applies as much to the customers of the high-rent businesses as to the principals of the businesses), the rents would by necessity drop.

I'm vegetarian and I liked Stogo. Weird name, but great taste, nice staff, and nice looking shop. But $5 for an ice cream (or soy cream or whatever) made it a rare extravagance. I guess the problem for the owners is that the product is not as addictive as coffee.

@Price is no object: A prospective-tenant strike on pricey commercial rents wouldn't force down rent prices; it would create a lot of empty storefronts, which aren't good for anybody.

Not all new neighborhood businesses are started by suckers for suckers. And not all (though surely some) businesses that close are forced out by their landlords in bids to trade them for deeper-pocketed tenants. Most businesses, sadly, will peter out on their own eventually.

I have a 2+ year old retail business in the neighborhood, and yes, my business would be stronger if my rent were lower. All the more reason that I should feel bummed that some of my neighbors might be boycotting it for no better reason than the fact that another (completely different) business used to have the same address.

Want to hang on to dwindling retail diversity in the neighborhood? Sick of chain stores, strip mall eateries, and banks? Me too. So along with your favorite neighborhood standbys, try dropping in every now and then on some small new businesses that are trying to make it in a tougher environment than ever.

I don't think any of their ice creams are soy based. It's hemp and coconut, so there's that...

I'd rather see empty storefronts than scumbag landlords profiting off the stupidity of the trendy, at the expense of my community. Boycott those racketeers by voting with your feet, and spend your housing dollar elsewhere. You might even find you have some money left over at the end of the month.

Maybe part of the problem is that hardcore health nuts and vegans are just not the kind of people who crave ice cream a whole lot, and you need people like that to keep such a business alive year-round. A place like Liquiteria can live forever (god willing), but vegan ice cream? meh

Adam K - my hat's off to anyone who can keep a place open these days. Good luck to you.

It is interesting to me that Stogos is going away, but Lula's (6th street) seems to be thriving. Same type of product, very different "marketing". I never set foot in Stogos, something about it kept me out. Lula's... sometimes I go there too often.

Lvv that is just an odd assessment. You don't have to be a health nut to want healthy food. Lots of people can't eat dairy, have high cholesterol and heart disease and dairy free ice cream is a great dessert option that is less bad.

I thought it was soy but I guess it was hemp but it had a bad aftertaste. I couldn't finish one cup, had to throw it out, and every time I went in they didn't have the coconut.

The lines at Lula's are long because their vegan ice cream is delicious and they have an appropriately sized store to what they are selling.

Jill, I was only speaking for the health nuts, and in my experience most don't really care about things like vegan ice cream, at least not enough to help sustain such a business. Also, just because it's vegan doesn't make it "healthy food."

Trends will be trends. Adam K has a good point, and the truth is, if a place is good enough to appeal to enough people to pay the ridiculous rent and make a profit, it lives. That some businesses get to do this while an irreplaceable craftsman like Mr. Fontana is forced out is tragic for all but the flip-flop wearing transients, leaving a hole in the neighborhood and well beyond (a truly good shoemaker is almost impossible to find these days).

I hated that Stogo took over that space, I hated the idea of its product (there's actually a law that says you can't call something 'ice cream' if it's not made from actual dairy...and this trendy thing of so many people supposedly being lactose intolerant--like being 'on the spectrum'--is vile), I hate what's happened to the neighborhood...but I couldn't actually hate Stogo and its owner. They were more a part of the current Zeitgeist than I am and they came to the logical location for their business idea. Angelo will never be back, so I look forward to seeing the next business for bubbleheads to take that space. Who knows, I might be an old bubblehead who actually starts going there.

I'm starting to this vegan is some sort of code word for "drowning in salt and sugar." I bought what looked like a delicious pasta/pesto meal at Birdbath yesterday and it was inedible. I think the sea has less salt in it. And it was $7.

sorry but i am a firm believer in KARMA and well, bad juju.
to say "i have nothing to do with it" when in fact you have quite a lot to do with it sounds similiar to the folks who work for places like "BP" and think they are off the hook scottfree bc they're just trying to "make a living." we all have to take responsibility for our place in life; we are not independent of what comes before or after, it is all one interconnected life we lead... especually in our little old village.

While it could be argued that new incoming businesses bear no responsibility for the circumstances by which a previous vacated their space, in this case, there was no vacancy between the time that Fontana was forced out by the landlord and Stogo announced its new store in Fontana;s space. This indicates a deal having been made between Stogo and the landlord before Fontana was booted by way of an unaffordable rent hike.

BTW: Kyra Sedgewick is married to actor Kevin Bacon and they were revealed on PBS to be cousins. But that's another story....

adam k- i hate to tell you this, but there are an awful lot of stores for rent in this city.
and of course for many different reasons. however, i'd wager a few that the majority are empty because the landlord raised to rent to an insane height (and possibly for a short time a replacement thought they could make it and didn't) or folks know the current asking price is way too high and are waiting for a more reasonable rent.

This is very sad news. Stogo is my favorite place for ice cream in NYC! I'm macrobiotic and Stogo has been my only dessert stop. I love the raspberry!
The rent raise is so unfair. I only wish there were some way to keep Stogo open; The fund raiser idea sounded so positive.
The quality of Stogo ice cream is outstanding. I do not want you to close. This is one place I will miss enormously.

@blue glass: I don't disagree with you about the amount of empty stores around. But bear in mind that many commercial landlords have big property portfolios, and a few empty storefronts aren't going to make much of a dent in them. They have no incentive to drop rents, and can afford to hold out indefinitely until a luxury brand or national chain takes the space.

So why boycott a well-meaning small business and do the bidding of a landlord who would be fine letting an empty storefront sit derelict for months or years in the hope of snagging another Starbucks?