And the for lease signs promptly went up... 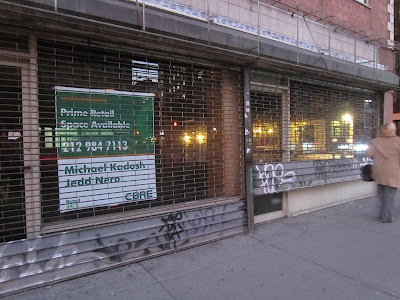 The listing (PDF) is now online at CBRE... and it turns out that more than just the former Soho Billiards home is available – the whole block between Mulberry and Mott on the north side of East Houston is up for grabs... 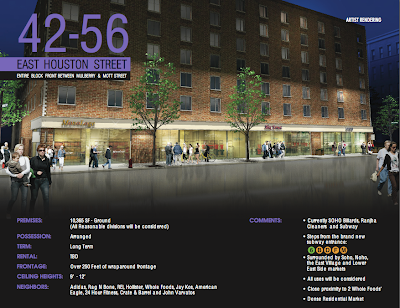 Which just might signal the end for the dry cleaners and Subway that share the building... This is prime real estate, as the listing points out, adjacent to the recently unveiled Bleecker Street Subway Transfer and retail neighbors like Adidas, Rag N Bone, REI, Hollister, Whole Foods, Crate & Barrel and John Varvatos. Terms of lease aren't disclosed.
Posted by Grieve at 6:20 AM

I vote for a huge Aeropostle, one that carries all the guy's stuff you could ever want.

Who does these heinous renderings? Love the "hip" (lesbian?) couple with the baby, group of kardashians, obligatory bike and group of bros on the sidewalk- and the store is called "MonoLoge"- that is very fitting for this monotonous landscape.

That's what they get for false advertising. The place wasn't even in SoHo.

I'm from Virginia, but when I look at that picture (artist rendering) the last thing that comes to my mind is New York.