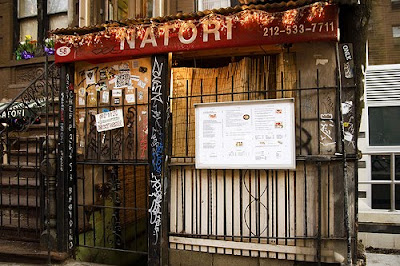 [Photo via The Village Voice]

Sad news via the EVG tipline... a reader passes along word that Natori, the hole-in-the-wall Japanese restaurant at 58 St. Mark's Place, will close on Friday night. The tipster understands that the owner has to return to Japan for family reasons. A Natori employee confirmed the closing as well.

Hirokazu Takaya opened Natori here in the late 1980s ... among other reasons, the place was well-known for its generous early-bird specials. Last year, The Voice named it as a "Best of" in the Japanese — Sushi category.

Updated:
Back on Nov. 26, a worker confirmed that Natori was closing. However, Natori remains open for now ... we'll see if we can get an update on what's happening here. Anyway, good news for now...
Posted by Grieve at 6:30 AM

That was the only place where you could get alligator meat in the EV. And yes, it does taste like chicken.

Booooooooooo! I heart Natori, especially the green room! this sucks.

Great hole in the wall [used to be] anonymous Japanese sushi joint. Saw many celebrities dining alone there, and no one gawks at them nor do they act like they're divas -- they're just one of the guys. Civilized and quiet place. A place where one can dine and think and not be bothered. You can hardly find this type of place in the EV anymore.

Noooo!!! I remember eating there when it first opened, I was a poor college student and would be amazed at the quality of food you got there for the price.
Recently I went to Natori after not having gone for a few years and the food was as good as I remembered. One of the pioneers, will be missed. Hope Mr. Takaya's family is ok

Sad to see this place closing and I dread what will take its place. Sayonara.

Great, the neighborhood feels even less like home now. Farewell to yet another EV original. It will be greatly missed.

This is indeed sad, sad news. Many years of good food and great memories. Will be going with our friends before Friday for a last hurrah!

Went last night for one last hurrah before it's gone. Sadly it seems that the alligator meat has already gone - but I'll miss getting a decent amount of food and some booze on the cheap.

Not sure what happened, but Natori was open today.