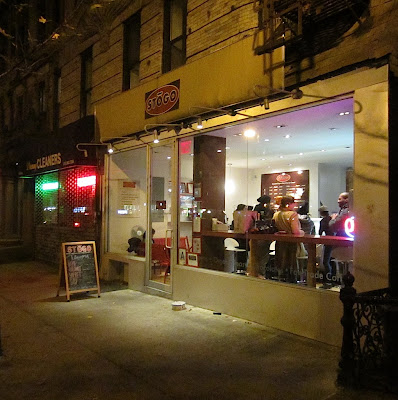 The New York Times had more on Stogo's closure... the vegan ice cream store closed for good last night after some four years in business.

Stogo, which is on Second Avenue, couldn’t pay October’s rent when it came due, but the month brought higher-than-expected sales. “We were starting to say, ‘O.K., we can probably pay this and that,’” [co-owner Junie] Ishimori said. “Then Sandy hit.”

Stogo lost power for days. Its ice cream spoiled, and even when power returned, it couldn’t reopen until it had replenished its stock. Ms. Ishimori estimated the store lost $6,000 in inventory and $6,000 in sales. “That’s a make-it-or-break-it number,” she said.

Stogo is now two months behind on rent. A spokeswoman for Beach Lane Management, which owns the building, declined to comment.

Ms. Ishimori had planned fund-raisers to finance a move to a cheaper location. But after the storm, she said, “it just felt frivolous asking people for money when people were homeless.”

DNAinfo's Serena Solomon first reported on the closure this past Wednesday. Our post to that link prompted 28 comments, among them:

Adam K. said...
@Price is no object: A prospective-tenant strike on pricey commercial rents wouldn't force down rent prices; it would create a lot of empty storefronts, which aren't good for anybody.

Not all new neighborhood businesses are started by suckers for suckers. And not all (though surely some) businesses that close are forced out by their landlords in bids to trade them for deeper-pocketed tenants. Most businesses, sadly, will peter out on their own eventually.

I have a 2+ year old retail business in the neighborhood, and yes, my business would be stronger if my rent were lower. All the more reason that I should feel bummed that some of my neighbors might be boycotting it for no better reason than the fact that another (completely different) business used to have the same address.

Want to hang on to dwindling retail diversity in the neighborhood? Sick of chain stores, strip mall eateries, and banks? Me too. So along with your favorite neighborhood standbys, try dropping in every now and then on some small new businesses that are trying to make it in a tougher environment than ever. 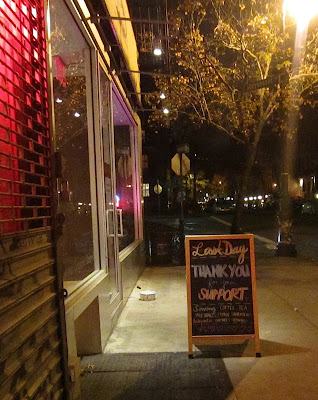 Email ThisBlogThis!Share to TwitterShare to FacebookShare to Pinterest
Labels: Stogo

No storefront left behind said...

Despite the curious sentiment that some empty storefronts would be a terrible thing, that's the only way to create pressure on the landlords to lower rents.

No empty storefronts means no competition; rents can go higher and higher and those businesses that are currently paying high rent can't just move a block or two away to reduce their rent.

Let some of these overpriced storefronts sit empty for awhile and the landlords will feel pressure to lower rents to attract tenants.

And let some of the businesses that attract only the bar and tourist trade fail. They don't make a community, they make an entertainment district.

Problem is, landlords can write off the months/years they have storefronts sitting empty on their taxes, so they really have no financial incentive to lower their rents. If the store is rented they get money, cool, if not, they get big tax breaks, cool.

But Gojira, one can only get a tax break on income. With enough empty rentals, those landlords you're talking about won't have enough income to make use of the tax break.

I'm not sure you realize just how much money a month's rent on a small or medium sized storefront costs these days.

There's an Italian restaurant near where I work that was paying $35,000 per month a few years ago! That means that they have to make over $1,000 in profit (not just sales) per day just to pay the rent. That's a lot of minnestone soup -- do the math.

And one more thing said...

I forgot to note also that a tax break isn't for the full amount of the claimed loss.

Or did you have some other accounting method in mind?

I don't know but I have seen storefronts stay empty for YEARS on Ave A closer to 2nd St. For example the building that is now Ave A Pharm was empty almost 10 years! Someone must be making money somewhere. They moved from their location around 5th st and Ave A because that landlord wanted 20,000 per month. That seems to be the going rate on Ave A. Somewhere between 17 and 20 grand a month for rent. Since they moved 2+ years ago from that location to 3rd and A the store on Ave A at 5th remains closed. No one has rented there. These landlords have seemed to be just fine with having these stores empty for several years while they hold out for big rents.