Via a tweet by @felixsalmon this morning ... we see that the long-discussed East Houston Street bike lanes are on the way... 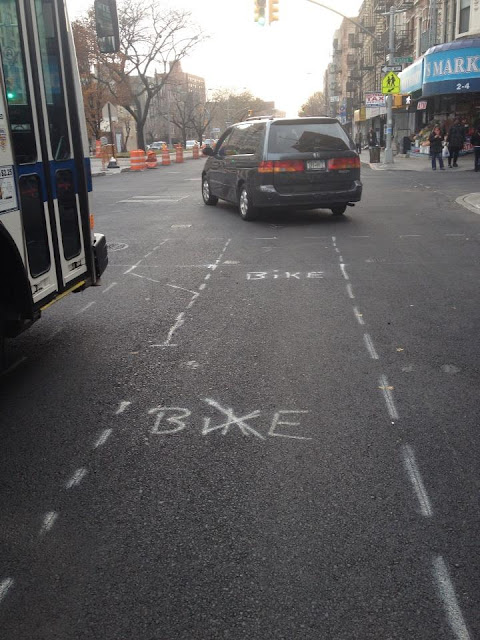 The $60 million Houston Street Corridor Reconstruction started in the fall of 2010, and is to include wider medians, bigger sidewalks, fewer traffic lanes and bike lanes... (Earlier this year, DNAinfo reported that the construction would now last through spring 2014...)

Back in 2009, Streetsblog pointed out that "instead of installing a physically protected path for cyclists, the city plans to paint a buffered, Class 2 lane" on East Houston... 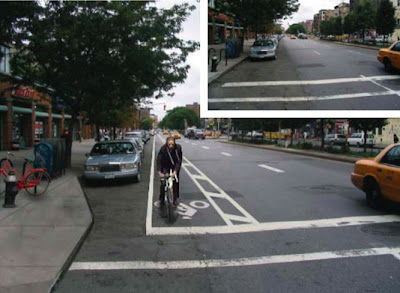 From that Streetsblog article:

Currently, 70 percent of drivers on East Houston Street speed, according to studies conducted by Transportation Alternatives. "It's hard to imagine that paint will offer the kind of protection mainstream New Yorkers will need to feel safe biking on this crucial, yet dangerous corridor," said TA's Wiley Norvell. "The city has innovative physically-protected designs on hand, and to not use them on Houston would be a huge missed opportunity."

Based on the top photo, it appears that the bike lanes won't be protected...

This is the official word on the project via the Lower Manhattan Construction Command Center:

To improve safety for pedestrians, bicyclists and motorists along East Houston Street, DDC will be installing a number of traffic-calming measures. One significant measure is the neck-down. A neck-down is an extension of the curb that shortens the crosswalk distance while at the same time requiring motorists to reduce their speed to turn onto a sidestreet. In addition to the neck-downs, medians will be extended into the crosswalk creating a visible traffic-calming measure and safe refuge area for pedestrians. Other improvements include:

• Dedicated Bicycle Lanes and Bike Racks: The lanes will create a safer environment for bicyclists by calming traffic; while the bike racks will encourage bicycle use by providing users a safe storage option.

Long-threatened East Houston reconstruction starting this month
Posted by Grieve at 10:38 AM

Nice that they're making the Cul de sac kids more at home : )

I'll take an unprotected lane, it's certainly better than none at all. I'm not one of these douchetips who likes to try and drop a bomb by making some flagrantly contrarian remark like "Ohhh you know the bike lame is actually the MOST dangerous place you could possibly ride." A crosswalk doesn't protect shit either but I'm glad its there. Painted lines are there simply to increase awareness and give motorists a clue as to where they should or should not be. No different from any other painted lane dividers.

I wish they had a protected lane, Houston is a bit too intense for me, I don't think it's safe to bike on it, I try to go East / West below or above it even if I have to go out of the way.

I'll take it too. Better than the nothing from the past. I try to avoid every major cross straight with bi-directional traffic due to all the buses, but I'll feel a little safer this way.

You'd have to be an idiot to ride a bike a houston st. for any distance. Such a wide street, too bad they could not have added a lane for bikes.

back in the day we would go drink all night on the LES w my bff on rollerblades and me on my skateboard, rolling home at 4 am, houston was a wide open plain. good times. miss that!!

yeah I try not to ride on houston, but I still welcome this. @Makeout, yeah too bad they didnt have bike lanes on Canal, they could have saved that "Cul de sac kid" Ray Deter...

it isn't too safe to walk around east houston street either.

This is the way it should be- those protected lanes take up too much space, make those dumb floating parking spots and makes riders oblivious to traffic conditions and are too close to the curb.

A half-way measure like this on Houston is basically useless--as mentioned, riding on Houston is suicidal now, and the non-protected lanes won't change that enough to make them practical.