In April, a retail listing went live for the storefronts housing the Dryden Gallery and Brothers Deli on Fourth Avenue and East 13th Street ... (The Dryden moved to another block in August.)

Then, in October, a well-placed tipster on the block told us that that the Dryden space would soon house a pizzeria ... and the Brothers Deli was closing at the end of November. "Negotiations are ongoing but it is almost certainly to become a restaurant," the tipster said at the time.

The going-out-of-business signs went up several days ago at Brothers... 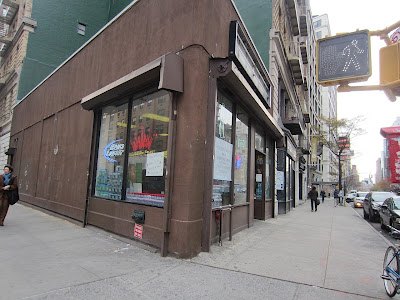 ... where everything is on sale — except for cigars and cigarettes... 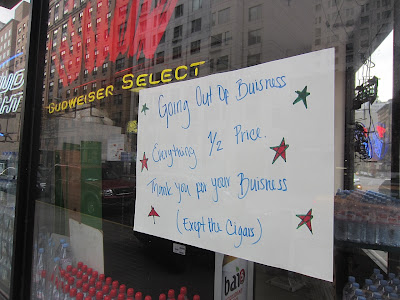 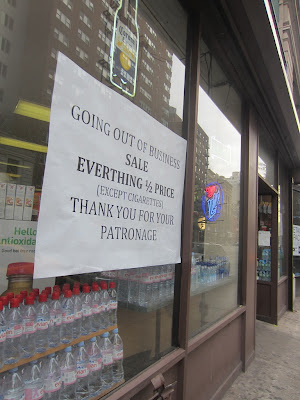 Meanwhile, across the street, the Hyatt Union Square is expected to open on Jan. 2.
Posted by Grieve at 6:21 AM

Very glad that Dryden's still in the neighborhood.

i am not happy about this. this is where i get my soda to smuggle into the movies at Union Square. it's one of the last corner delis left in that area--they've all been shuttered in recent years.

and we don't need another cutesy bakery.

I suggest then that you buy the Home Soda-Making Kit for your rooftop and make your own in Mason Jars. It comes with artisanal aspartame and ironic "Sprout" soda Wacky Pack stickers.

This is the original Hammacher Schlemmer Building: http://gvshp.org/blog/2011/09/06/ground-breaking-gadgets-on-4th-avenue/