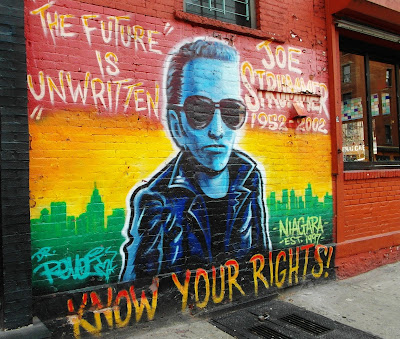 Joe was not the most famous rock star – but he was the best.

If you came of age in the Seventies, his death meant as much as losing John Lennon – an unbearable loss, leaving a gap that would never be filled.

Because Joe was unique.

As he got older, his idealism only increased, and his fire burned still brighter.

I knew him before he had a record deal and I saw him just before he died.

And in my entire life I never met anyone with a bigger heart than Joe Strummer.

“Without people, you’re nothing,” he once said.

May bloggers (or whatever they will be called) write about this mural on Seventh Street and Avenue A years and years from now... Meanwhile, Alex has this to say today about Joe at Flaming Pablum.

R.I.P. Brother Joe - you are missed by many. Thank you for what you gave us all through your unique perspective on life. You are a personal inspiration daily to me. The world NEEDS more people like you here. As you said "Always remember you're alive". And you do live on in many of us...

The Clash was before my generation so I don't know much about them or Strummer, but the story seems like a good intro.

The passing of Joe is one of my definitive EV memories. At the time I was still wide-eyed and playing gigs with my shitty band. I was just a casual fan of the Clash but only a couple months before his passing I had seen Joe perform at St Anne's in Dumbo. It was a great fun show, he was so vital and youthful. To honor a couple of his New York idols he and the band performed "Walk on the Wild Side" and "Blitzkrieg Bop", really surprising and cool. When I read on NME.com it was a shock. Way too young and still so vital. As I said I'm not a huge Clash fan but having been at that show I feel some connection to the guy. Rock and roll misses Joe.

Thanks for the link, Morgan — I missed that....

#1 I had to explain who Joe Strummer was to my barback tonight. boo. #2 I got to tell my Joe Strummer/John Doe fantasy mud wrestling league story.True story, one of the most memorable of my life.