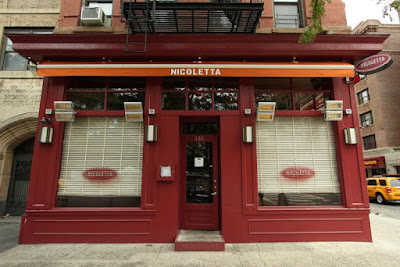 Last evening, CB3 released the September agenda for the SLA committee meeting coming up on Sept. 1.

So far, not all the applications and questionnaires have been filed online. So we'll take a look in the days ahead as more information becomes available. (You can find the applicants here.)

One item to start with... Nicoletta, chef Michael White's Midwestern-style pizzeria that opened to a lot of hype in June 2012 (and lousy reviews), is on the docket for an upgrade to a full liquor license. (They currently only serve beer and wine.)

There was speculation almost two years ago to the day that White might close Nicoletta and swap it out for another restaurant from his empire. (Eater even put the pizzeria on Second Avenue and East 10th Street on Deathwatch.)

Well, two years later, and Nicoletta has expanded into New Jersey with a space in D.C. on the way. Anyway, they'll likely be more speculation as to whether Nicoletta will solider on with full liquor, or if this is a step to secure a license for another venture.

And it has been about two years since we heard anything from anyone about the place. Early on, some EVG readers were turned off by Nicoletta's T.G.I. Fridaysish interior and clipboard-toting hostesses standing guard by the door. Feeling any different about Nicoletta these days?

You need hard liquor to wash down that shit pizza! Cardboard pizza reminds me of when I tried to get pizza in Michigan...

I walk by this place all the time and it's never busy. I think they're starting to learn how bad the 13th Step and the surrounding gaggle of bars are for local businesses, particularly the restaurants. No one wants to pay a higher price to eat in the middle of that shit show.

LOL, of course their NJ outpost is in Bernardsville, NJ, home of the snoots. The ex-NYC suburbanites of Hoityville will love this scene crap, even though it's known to be awful, "Midwestern pizza" is itself a terrifying idea.

Say what one will about Jerseyites, but they know how to make good pizza. You're also 100x more likely to get a real bagel out there.

I wouldn't know, I've never set foot in the place, and don't intend to. I'll stick with Nonna's on Avenue A, thank you.

The Nicolette deathwatch nears it's inevitable end. A full liquor license means they are throwing in the towel. Get ready for a new high concept theme bar, the era of overpriced pizza are finally over. What's next, vodka-filled dumplings?

The last time I was at Centosette, I was forced to listen to an investment banking cougar at the next table explain to her much younger boy toy rent-a-date how the unions had destroyed all the jobs in the country, and that the real evil in the world came from bloated pensions and generous entitlement programs. Her boy toy seemed to have no idea what she was talking about, and just nodded while gulping down as much free food as possible before being dragged back to her place for the obligatory organic enema and waterboarding session. It was then that I realized the ethnic cleansing of the EV had finally succeeded, and Cafe Centosette closed for good a month or two later.

Amazing story, Giovanni! My last meal at Centosette was a lovely, peaceful affair. Maybe Ballaro would be the closest to it, in terms of a mellow place with European flair...except that poor place was attached by bros recently.

Vodka-filled dumplings, not a bad idea if a little old-world. No, I suspect there's a nascent market in THC-infused alcoholic beverages, etc., that is, once being a pothead goes totally mainstream. The old poisons are just too crude and aren't up to the task of keeping everyone in a calm, sweet, and happy place while the company curtains all around them are stripped away to reveal the brick walls.

Okay, 1.) there's no such thing as a "Midwestern pizza." There are many, many overlapping Midwestern local and regional pizza styles. Many taste like cardboard, and many are delicious.
2.) Nicoletta makes a delicious pie, whatever they want to call it. But c'mon, it's not even party cut?
3.) It's probable that no restaurant at this point can sustain itself without a bar, now that the rents are so damn high that even Chase can't afford to be there.

they are directly across the street from a church
less than 500 ft
doesn't that mean only wine & beer is allowed?

I've dined there a few times…The pizza was excellent, the staff was courteous, and they played classic rock instead of godawful pop or EDM. What's not to like?

I had a pretty good pizza there, but the waitstaff was annoying. In their defense, they were probably bored as hell, as I was the only person in the whole restaurant the whole time I was there. Totally sucks! But i've seen it nearly full on other days.

Also -- what is this term "midwestern pizza"? As a Missourian partly raised in Chicago (and a New Yorker for 11 years now -- thank god), it struck me as completely meaningless. We have all kinds of pizzas in the midwest, a lot of them quite delicious.

But apparently, this really is Michael White's concept: cheaply made, easily made, pizza that hearkens to his youth in Wisconsin where apparently the pizza isn't that great. (What? Why is this a good idea? And why does he proclaim as much?)

Here's a piece where he explains what he means to do: http://slice.seriouseats.com/archives/2012/08/nicoletta-review-michael-white.html