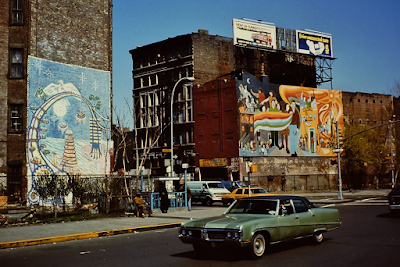 [Houston and 2nd Avenue from April 1980 by Ed Sijmons]

Earlier this month, a reader sent me a 1980 NYC photo essay from the Tribeca Citizen.

Here's the premise. In the spring of 1980, Ed Sijmons and LouiseLH of Amsterdam visited New York City and took hundreds of photos ... and Sijmons recently posted them on Flickr... and passed the links on to the Citizen.

While the above photo of East Houston and the Bowery is the closest they came to the East Village, there are plentiful shots from all over the city, from the Lower East Side, Chinatown, the Financial District, Midtown... even some in Coney Island.

I think that's Houston and 2nd Avenue. There is no subway entrance at Bowery.

Wow, I checked out the galleries on Flickr and it reminded me of how NY looked when I first moved here (1981). There is garbage just about everywhere no matter what part of town the pictures were taken. There was not enough money for sanitation unlike today. When people came to visit me a tell me how dirty the city was I told them "are there millions of people on the streets of where you live?" I would say the city did have an overall "patina" some of it dating back to coal burning days and high lead gas.

I don't care what anyone says, I loved that dirty, grimy, collapsing old New York so much better than the glitzy, rich shit-show it has become...

There are a lot of nice shots on his Flickr page. Thanks for sharing.

That corner looked like that for a long time...beautiful.

Time and memory are such a funny thing. To me, this is how NY looks. Intellectually I know that in each photo there is something off, but it's still how I think of it, despite the time that has lapsed. The photos that make me realize I'm out of sorts are the World Trade Center poster font, and photos with cars. I did have to pause for the Greenmarket News being typewritten, that was pretty nice, but so familiar.

Wow! I was 5 years old living in the East Vill when these were taken. That one shot of the mural that says Truck Rental was a Truck Yard on the corner of Bowery and 4th Street (which is now a luxury condo with a Crunch gym on the ground floor).. I liked it better as a truck yard.