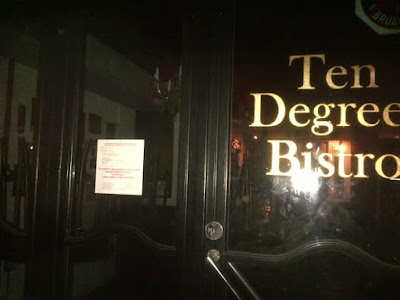 A reader sent along this photo from last night, showing that the landlord has taken legal possession of 10 Degrees Bistro at 131 Avenue A between St. Mark's Place and East Ninth Street.

There isn't any information available about the closure at the moment. This doesn't necessarily mean the end for the restaurant… but it's not a great sign either.

The proprietors of Ten Degrees Bar around the corner on St. Mark's took over operations of the Flea Market Cafe in March 2013 ... changing the name to 10 Degrees Bistro in December 2013.

On Avenue A, Flea Market Cafe is now Ten Degrees Bistro
Posted by Grieve at 4:24 AM

...and the fun continues on Avenue A.

Nothing is more desirable than property along side a park. Top dollar will be asked for these retail spaces and most likely they will remain empty for 2 years or until this bubble pops.

And you can be sure that the bubble will burst...cause 2016 elections are just around the corner!

One less place for the bros to hang out and scream and get drunk all over the street...that's all I am saying :)

This wasn't a bro hangout. It was a relatively more "classy" place for the hood. It was usually pretty crowded and somewhat pricey for the neighborhood so I would expect them to reopen. It was a decent place for someone in their thirties to hang out without all the annoying youngins.

Karma -- the way Ten Degrees "seized" this from the previous owner just bit them back.

It wasn't a bro hangout but it was place for their hanger-ons -- the sorostitutes -- to brunch. If you can call Univ. of Alabama's Alpha Phi classy, then yes this place was classy.

sisters from alabama came for brunch?

I suppose you don't know the meaning of metaphor, literally.