Tompkins Square Park will be a little less shady 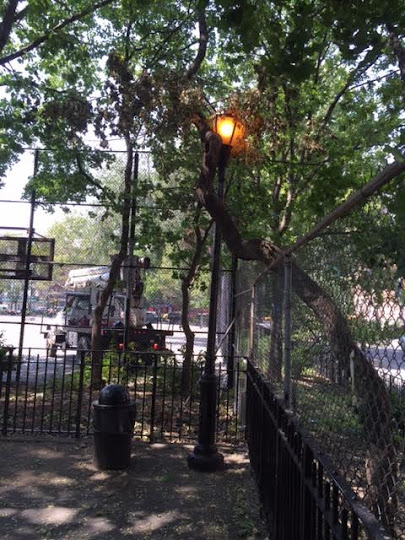 Earlier today, the Community Board 3 office passed along some information from the Parks Department, who recently completed an assessment of trees in city parks throughout Manhattan.

Crews have identified some trees that are dead, decaying or structurally unsound, and need to be removed for public safety. Unfortunately, according to the Parks Department, six of those trees reside in Tompkins Square Park.

EVG correspondent Steven was in the Park this afternoon, and spotted a crew in charge of removing three trees on the East 10th Street side of the Park... one of which was pushing into a light pole... 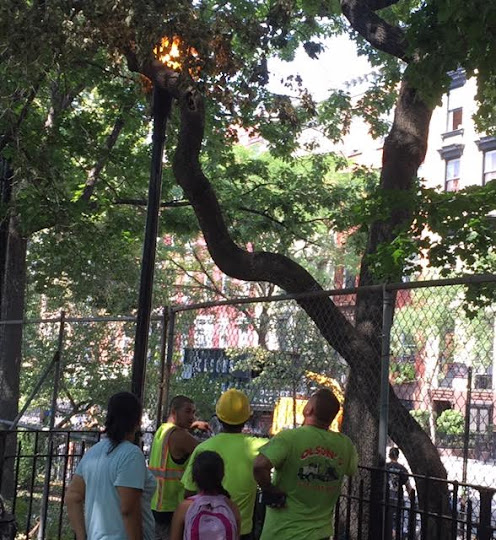 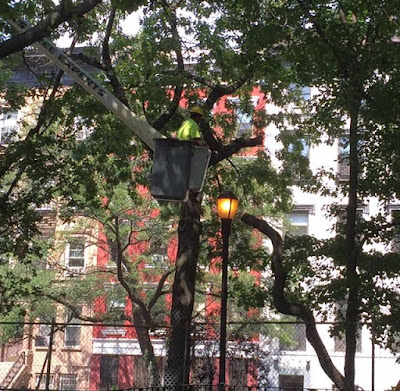 CB3 District Manager Susan Stetzer said that complaints regarding unsafe trees have increased recently ... and that the Community Board is relaying those concerns in a timely manner to the Parks Department.

Stetzer also said that all six trees that the city removes will be replaced with new trees.
Posted by Grieve at 3:00 PM

"CB3 District Manager Susan Stetzer said that complaints regarding unsafe trees have increased recently ... and that the Community Board is relaying those concerns in a timely manner to the Parks Department so they can be replaced with more bars."

All good things. Dead trees are dangerous. It's good that the ones that will be removed will be replaced.

Hey, it's been like 10 minutes and no one has blamed de Blasio yet.

New York City needs to be re-forested! Not just the EV, the whole island!

Took one out on St Marks also...

I hope they replace them with native trees that support abundant insect and bird species, such as oak. No more bradford pears please!