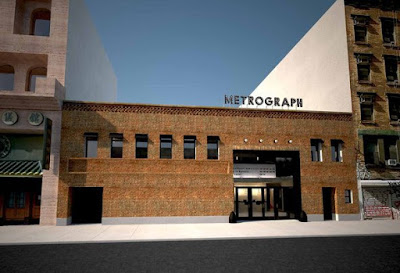 In case you missed this in the Times yesterday... Alexander Olch, who owns a high-end boutique on Orchard Street, announced his plans to open the Metrograph on Ludlow at Canal early next year.

The ambitious-sounding complex includes a two-screen theater that will feature independent and international movies as well as repertory films, plus a restaurant, café and lounge, and cinema-dedicated bookshop. (Curious how CB3 will view this liquor-license application. They wouldn't approve a full liquor license for the Sunshine Cinema in 2012.)

Anyway, here's more from the Times:

Michael Lieberman, a spokesman for the project, said the design was aimed at creating an inviting space, with a balcony in the larger theater, which will have 175 seats — the second one will have 50 — and chairs fashioned out of wood salvaged from the old Domino Sugar Factory.

The film programers will be Jacob Perlin and Aliza Ma. Perlin is currently programmer-at-large at the Film Society of Lincoln Center ... while Ma is a veteran of several high-profile film festivals as well as the Museum of the Moving Image.

"Growing up in Manhattan, I fell in love with movies in theaters which are now sadly gone, like The Beekman and The Plaza," says Metrograph founder and New York-based director Alexander Olch. "To bring glamour, excitement, and prestige back to the exhibition experience has been my longstanding goal."

Visit the Metrograph website to sign up for their newsletter for updates.
Posted by Grieve at 4:10 AM

I can sympathize, having grown up in the city, as well.I used to cut classes and go to the Regency, Thalia, Theater 80, Bleecker St Cinema, as well as the more 1st run places like the Paris and Cinema Village.

It's nice to have more options for this, even if so much is streaming at home nowadays.

Metrograph is a cool name.

Sounds too precious. Power to the people... not the cinema snob crowd. Do I see $20.00 tkts coming? Yup.

great news. not a resto or bar, not a bank or drugstore. culture instead. I'll take it!

They embody two of the three things people don't buy any more: CDs, Books, and Movies.