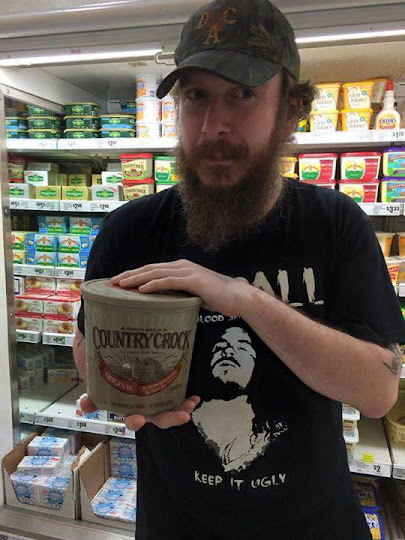 Shane Keogh, a familiar figure behind the bar at the Grassroots Tavern and on stage as bassist for Iconicide and Lucifer Jones, died on Aug. 14.

He collapsed on his way to the New York Sports Club on Avenue A. The cause of death was cardiac arrhythmia, said his girlfriend, Blair Hopkins. He was 38 years old.

Keogh worked as a bartender the past three years at the Grassroots Tavern on St. Mark's Place.

"He loved it there and referred to it as the Supreme Court of Bartending jobs," Hopkins told us.

He also worked as a bartender at the now-closed Bar 82 on Second Avenue and Identity Bar on East Sixth Street, Blue Ruin and Bellevue in Hell's Kitchen, and at the first Duff's Brooklyn.

Keogh was a native New Yorker and grew up in the Bronx.

There is a wake for his friends and family tomorrow night from 5-9 at Walker Funeral Home in Woodhaven, Queens. His friends will be gathering afterwards at the Grassroots Tavern, 20 St. Mark's Place between Second Avenue and Third Avenues. (The bar has a memorial fund going to help pay for funeral-related expenses.)

"He liked to refer to himself as 'Captain Fun' behind the bar," Hopkins said. "He was the kind of person who would do absolutely anything to elicit a laugh." 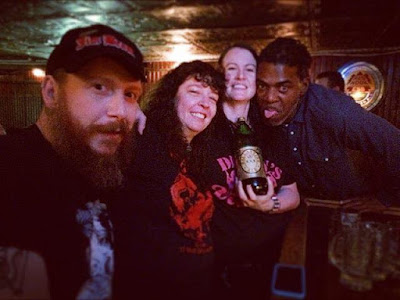 [Keough, left, at the Grassroots]

There is a public "Memories of Shane Keogh" Facebook page here.

Photos courtesy of Blair Hopkins
Posted by Grieve at 7:33 PM

38? Fuck me. So sorry to hear about this. Condolences to all his loved ones.

Very sad news. My heart goes out to everyone who knew and loved him.

This is so sad. Shane was one of my favorite bartenders. Condolences to his friends and family.

Hadn't seen him in years, but Shane was a great guy who was always very kind to me and my pals while we were drunken fools at Bellevue Bar. My heart goes out to his friends and family.

This is beyond sad. I didn't know Shane—hadn't set foot in the Grassroots in over 30 years—but it's just another sign that life can be cruel.

In the words of Warren Zevon: "Enjoy every sandwich."

I only met Shane once, and he was such a nice guy. My heart goes out to Blair, Maria and the rest of his Grassroots family and his biological family.What a terrible loss.

Yeah, this is one major bummer. If there is anything positive, it is that he really touched so many people and it has been bittersweet reading all the memories of Shane that people have been sharing with us since his unfortunate passing. Big hugs to Blair, everyone at Grassroots, and to the friends at his former bars and all the band mates, etc. And of course my sincerest condolences to his family and close friends.

Condolences to his friends and family... I only knew him for two years, back in 2005, when he was working @ Duff´s. What a great time we had, and lots of laughs..He was such a nice guy. Rest In Peace, dear Shane.

How can I put into words what Shane's passing means to me? It feels like a part of my childhood has been lost. So many happy and sad memories and every one of them was a life lesson learned. He was always funny and an old soul. He loved music, family, friends and laughter. He once told me that he often wished he was an only child. He said things seemed happier then before the other 4 came along. Well, I know he is in Heaven now in the warm embrace of his mom...who is probably giving him a swift smack in the head for all the crap that he has done and a huge embrace for all the lives that he has touched. May you rest in peace, Shane. May all who have known you continue to live life for you. May we all keep his memory in our hearts.

I loved this guy and he went way too young. You touched a lot of people Shane and I hope his family and friends know that.