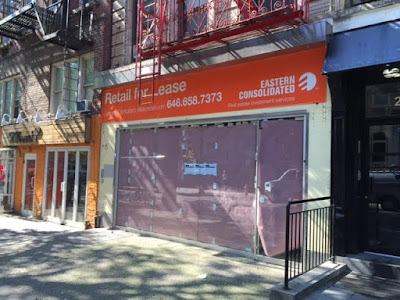 A few Mondays ago we reported that Caffe Bene, the coffeehouse chain based in Seoul, South Korea, is opening two locations in the East Village.

Work has started at both of the incoming Caffe Bene spaces… paper and permits are up at 24 St. Mark's Place between Third Avenue and Second Avenue … in the former Pinkberry space (above) … and the plywood arrived last Thursday at the southeast corner of Avenue A and East 13th Street… 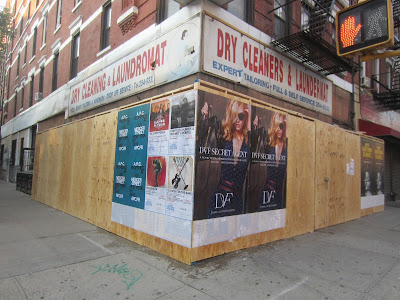 The proprietors of the Avenue A location are seeking a beer-wine license for the address. (They will make their case tonight before CB's SLA committee.)

The previous tenant, Kim's Laundromat & Cleaners, got rent-hiked out of here in July 2014. 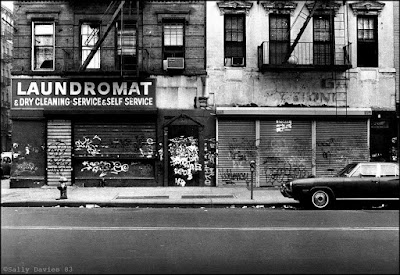 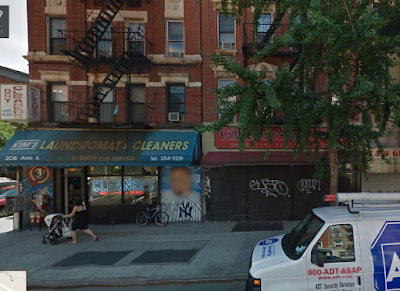 Reader report: Rent hike washes away longtime Avenue A laundromat
Posted by Grieve at 4:22 AM

This one bothers me more than that retched 7-11 two blocks away. Some newly moved in suburbanites will go to Bene, they like slick corporate food places, but my guess is Cafe Ost across the street will kicks this places ass.

Wish residents could stop an international sandwich franchise intent on increasing its brand from opening on Ave A with beer/wine license, but it appears SLA would have no legal standing to deny the application. All the more reason to support Ost- a true East Village treasure.

I washed my clothes there when I first moved to the nabe in 1979. No photo for proof, sorry to say, but I assure my fellow EVG readers, this is certainly not something I'd lie about!

What's your reason for wanting to stop it? There's are no grab and go food spots on Avenue A around 13th St. I think this Caffe Bene adds value from that perspective

The East Village is a true reflection of what our great city of New York is made of, it is a beautiful conglomerate of ethnicites and cultures which may have originated internationally but have found a way to come together, grow together to make this city is what it is today. I am excited for Bene to continue this growth in a direction which "brands" the East Village as a part of NYC which embraces ALL!! I am looking forward to supporting both OST and Bene! Can't wait for Bene's cheesy honey bread !!! yum.

i just love that every establishment, even a coffee shop, needs to sell alcohol.
beer and wine are alcohol and are the "foot in the door" to full liquor licenses.
does every new business have to serve alcohol?

Cafe OST- overpriced coffee, moody baristas, limited food options, AC that either leaks or isn't working half of the time, WiFi blows...yep, seems to fit the bill of an East Village "neighborhood cafe"

WHERE ARE THE PROTESTERS??? HOW come they aren't out in full force (5 people) protesting this like they did 7/11??? chain discriminators!!

Why is Taz's face blurred out on the Google image? Chico's memorial is gone by the way. He was so present in the neighborhood and now he has been erased twice.

The reasoning against is it's an international franchise that wants to add a liquor license to an address that has never had one on a two block stretch that already has 9 licenses. None of the other Bene franchises has a liquor license. There is a sandwich deli at the corner of 12th and A. There is a Mexican deli with great food across the street between 13th and 14th. Franchises are about tourists and short term residents who are looking for a logo rather than local businesses that are part of the neighborhood's fabric. They want a license and to be open until 2am without having proved themselves to be a good neighbor.

Caffé Bene's place on the southwest corner of W. 49th St. and Broadway is the coolest coffee shop in NY. It has two floors and books lining two walls. Check it out when you're up there.
More coffee shops should do this.

That scruffy section of Avenue A is due to get spiffed up. You can't have insane high rents and shitty retail coexisting forever. Something's gotta give. Anyways the charm of Alphabet City is long gone and without the charm what do you have? A run down looking neighborhood. Might as well mall-ify the place already.

it is weird that everyone freaked out about 7/11 and not one peep against another chain coming to Avenue A.

Ultimately who really cares? Once you start validating the term barrista, you are part of the culture. Chains? What constitutes a chain? Two or three stores? Does that mean I should give up on Dos Toros ( or is it toreros?). Should we give up on Tomkins Sq. bagels when they open their new spot? I can understand the reaction against 7-11--the food (if that's what it is called resembles the fried fare at the Iowa State fair).

Agreeing with Bayou's comment, above; signed on to note the same thing.

If you feel the need to protest, please feel free to. But don't assign people homework. If this is important to you, as the 7-Eleven was to some of us, get off your ass and do something about it.

If I didn't have to work late I would be at the community board meeting tonight to protest this licence. We do not need a chain store with alcohol. And I do not agree with the previous comments as far as "run down" looking neighborhood. Go 60 blocks north already, twit.

That Sally Davies photo of the spot back-in-the-day is really interesting. Love old-school shots of pre- and post-war structures in the city.

I wonder when that doorway where Chico's mural used to be was bricked up. At some place in the distant past, it was made to be used, then no more. Wonder where it went to in the building itself.

Back in the day wealthy people used to come to the EV (it was called slumming) they came here because they wanted to get away from the slick, sanitize neighborhoods they lived in uptown. Today we are getting a new kind of wealthy visitor unfortunately they are buying buildings and apartments and slick and sanitized is coming along with them. You can't have character, interest, uniqueness without some grit, grime and decay.

9:20AM, you must be shillin' me. A beautiful conglomeration of cultures that has come together? New York City is one of the financial lynchpins of the world, and as such it is defined by about as much segregation along ethnic and class lines as you would expect from any proud third world country, and it's only becoming more and more obvious all the time. Just because mestizos deliver the food ordered by the Asian NYU students that the Indians make doesn't doesn't mean it's all 'smile on your brother' down here. At the end of the day, people mostly go home to their own kind. The cooperation you see is determined by economic necessity.

I also love the whole 'we sophisticated city folk don't savvy you classless suburbanites' talk. Taking pride in living in a city is like a rat that prizes its cage or a corpse that prizes its mausoleum. Congratulations, you've accommodated yourself to conditions normal creatures would find intolerable; living in a concrete maze, stacked on top of millions of anonymous animals. You know what other creatures love cities? Rats and cockroaches. Humans, rats and cockroaches, put that at the center of your new urban mandala.

Nah, I'm jus frontin', city's cool, city's cool. (So long they don't close the bridges and turn the water and electricity off and close down the mass transportation and ...)

As usual Up-skirting By Meh adds nothing to the conversation other than his fine-tuned trolling.

Using NYC Buildings Department Buildings Information System (BIS), you can get some clues about 208 Avenue A.

There's also some phone numbers of people you can contact if you really want to find out, i.e. "METROPOLITAN LAUNDRY MACH." was the laundry machine supplier of the laundromat since at least 1991.

I do wish that BIS had more info, though, such as DBA information by address, so that you can look it up on the Corporation & Business Entity Database.

I was fine with them moving in until I heard they wanted to sell beer and wine. That makes no sense. The other Cafe Benes are all about coffee. And we are saturated with drinking spots around here.

For what it's worth, here is what I learned at CB3 meeting last night:

The franchisee is the son of long-time deli proprietors of the EV. He grew up behind the counter in his parents deli and those of his extended family, also in the EV.

The addition of beer and wine was his idea, not the chain's. FYI: Starbucks now has 75 stores selling an "evening menu" that includes wine and local craft beers. A new one is opening up in Williamsburg this month. Being entreprenurial, he picked up on this and wanted to get ahead of the trend. While I don't encourage it, I understand a business owner having to stay ahead of the competition.

The addition of wine and beer was agreed upon with the chain before he had located a venue. Knowing the EV, there's probably nowhere he could place a Cafe Bene without it being in the middle of bro bars, so to stay where he considers "home," there was not much choice.

CB3 is recommending to the SLA that they hold off for a year to allow the venue to succeed first without the liquor and then reconsider. It's up to the SLA to decide where or not to follow this suggestion.

Oh this is making my heart hurt. I did my laundry there when they had free soap and before they became only for drop offs. Then I went to the happiest launderers on earth across the street until it turned into a bar. Then on to Ave B gigantic corner where I had more clothes stolen than I can count. Then to 14th until they tore it down for a soon to be condo. Then I moved and now pay half the price and it's in the basement. But I still miss the free soap. And the neighborhood. And did I mention I never actually did the laundry because I couldn't carry it down and up 76 steps, so that was not my job. Now I have to do the laundry sometimes. Ech.